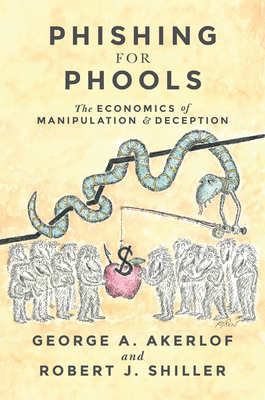 The Economics of Manipulation and Deception

Ever since Adam Smith, the central teaching of economics has been that free markets provide us with material well-being, as if by an invisible hand. In Phishing for Phools, Nobel Prize-winning economists George Akerlof and Robert Shiller deliver a fundamental challenge to this insight, arguing that markets harm as well as help us. As long as there is profit to be made, sellers will systematically exploit our psychological weaknesses and our ignorance through manipulation and deception. Rather than being essentially benign and always creating the greater good, markets are inherently filled with tricks and traps and will phish us as phools. Phishing for Phools therefore strikes a radically new direction in economics, based on the intuitive idea that markets both give and take away. Akerlof and Shiller bring this idea to life through dozens of stories that show how phishing affects everyone, in almost every walk of life. We spend our money up to the limit, and then worry about how to pay the next month's bills. The financial system soars, then crashes. We are attracted, more than we know, by advertising. Our political system is distorted by money. We pay too much for gym memberships, cars, houses, and credit cards. Drug companies ingeniously market pharmaceuticals that do us little good, and sometimes are downright dangerous. Phishing for Phools explores the central role of manipulation and deception in fascinating detail in each of these areas and many more. It thereby explains a paradox: why, at a time when we are better off than ever before in history, all too many of us are leading lives of quiet desperation. At the same time, the book tells stories of individuals who have stood against economic trickery--and how it can be reduced through greater knowledge, reform, and regulation.

George A. Akerlof is University Professor at Georgetown University and the winner of the 2001 Nobel Prize. Robert J. Shiller is Sterling Professor of Economics at Yale University, the winner of the 2013 Nobel Prize in economics, and the author of the New York Times bestseller Irrational Exuberance (Princeton). Akerlof and Shiller are also the authors of Animal Spirits: How Human Psychology Drives the Economy, and Why It Matters for Global Capitalism (Princeton).
Loading...
or support indie stores by buying on