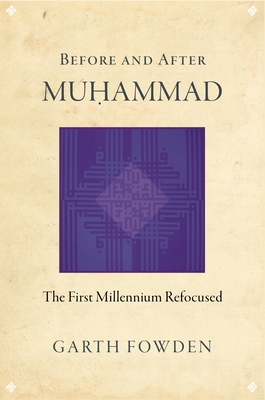 Before and After Muhammad

Islam emerged amid flourishing Christian and Jewish cultures, yet students of Antiquity and the Middle Ages mostly ignore it. Despite intensive study of late Antiquity over the last fifty years, even generous definitions of this period have reached only the eighth century, whereas Islam did not mature sufficiently to compare with Christianity or rabbinic Judaism until the tenth century. Before and After Muhammad suggests a new way of thinking about the historical relationship between the scriptural monotheisms, integrating Islam into European and West Asian history. Garth Fowden identifies the whole of the First Millennium--from Augustus and Christ to the formation of a recognizably Islamic worldview by the time of the philosopher Avicenna--as the proper chronological unit of analysis for understanding the emergence and maturation of the three monotheistic faiths across Eurasia. Fowden proposes not just a chronological expansion of late Antiquity but also an eastward shift in the geographical frame to embrace Iran. In Before and After Muhammad, Fowden looks at Judaism, Christianity, and Islam alongside other important developments in Greek philosophy and Roman law, to reveal how the First Millennium was bound together by diverse exegetical traditions that nurtured communities and often stimulated each other.

Garth Fowden is Research Director at the Institute of Historical Research, National Research Foundation, Athens, and Sultan Qaboos Professor of Abrahamic Faiths at the University of Cambridge. His books include "The Egyptian Hermes: A Historical Approach to the Late Pagan Mind" and "Empire to Commonwealth: Consequences of Monotheism in Late Antiquity" (both Princeton).
or support indie stores by buying on