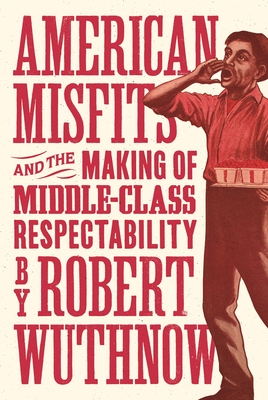 American Misfits and the Making of Middle-Class Respectability

How did Americans come to think of themselves as respectable members of the middle class? Was it just by earning a decent living? Or did it require something more? And if it did, what can we learn that may still apply? The quest for middle-class respectability in nineteenth-century America is usually described as a process of inculcating positive values such as honesty, hard work, independence, and cultural refinement. But clergy, educators, and community leaders also defined respectability negatively, by maligning individuals and groups-"misfits"-who deviated from accepted norms. Robert Wuthnow argues that respectability is constructed by "othering" people who do not fit into easily recognizable, socially approved categories. He demonstrates this through an in-depth examination of a wide variety of individuals and groups that became objects of derision. We meet a disabled Civil War veteran who worked as a huckster on the edges of the frontier, the wife of a lunatic who raised her family while her husband was institutionalized, an immigrant religious community accused of sedition, and a wealthy scion charged with profiteering. Unlike respected Americans who marched confidently toward worldly and heavenly success, such misfits were usually ignored in paeans about the nation. But they played an important part in the cultural work that made America, and their story is essential for understanding the "othering" that remains so much a part of American culture and politics today.

Robert Wuthnow is the Gerhard R. Andlinger '52 Professor of Social Sciences at Princeton University. He is the author of many works about American culture and society, including Red State Religion: Faith and Politics in America's Heartland and Rough Country: How Texas Became America's Most Powerful Bible-Belt State (both Princeton).
Loading...
or support indie stores by buying on