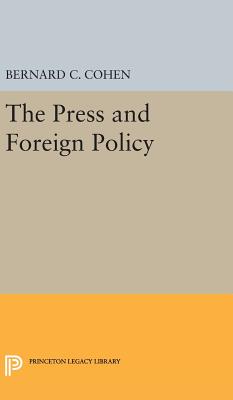 The relationship between the Washington correspondents of major news-gathering media and representatives of the foreign policy sections of the United States government has long been assumed, but its nature has never been analyzed. In a pioneering study of this relationship, Professor Cohen has used the observable results of contact, the printed and spoken words of the correspondents, as well as data from two sets of structured interviews with members of the press and government in Washington in 1953-1954 and again in 1960. Because the treatment is placed in the general context of a theory of the foreign-policy making process, many of its insights should be applicable to government-press relationships in other fields and in other countries. The degree and kind of influence of the press on American foreign policy will come as a surprise to many readers.

Originally published in 1963. The Princeton Legacy Library uses the latest print-on-demand technology to again make available previously out-of-print books from the distinguished backlist of Princeton University Press. These editions preserve the original texts of these important books while presenting them in durable paperback and hardcover editions. The goal of the Princeton Legacy Library is to vastly increase access to the rich scholarly heritage found in the thousands of books published by Princeton University Press since its founding in 1905.