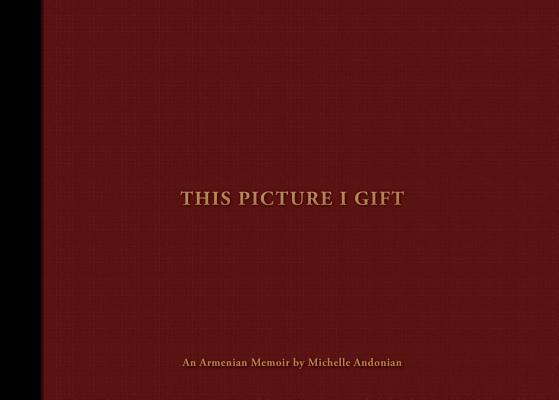 This Picture I Gift (Hardcover)

A prize-winning photojournalist and visual artist, Michelle Andonian has documented people and places around the world for three decades. Now, in her most personal work, This Picture I Gift, tales from her Detroit childhood inspire a modern journey-and a timeless vision of Armenia and Armenians.

As the author comes to terms with the life of her grandmother, a survivor of the twentieth century's first genocide, she documents a journey that spanned one hundred years and three generations through photographs and memoirs. In captivating photographic detail, the book revisits and explores lost historical lands and landmarks, bringing them together with present-day Armenia to honor an ancient people determined to live on.

This beautifully printed and hand-assembled book has an exposed Smyth sewn binding with dust jacket, housed in a pocketed drop-spine outer hardcover wrapped in cloth.

Michelle Andonian is an award-winning photographer. Her most personal work tells the stories of Armenian Genocide survivors and the 1988 earthquake and has resulted in several trips to Armenia. As a producer, director, and photographer, she spent a decade photographing children's philanthropic programs around the world. A lifelong Detroiter, she began her career at the Detroit News, where she was nominated for a Pulitzer for a month long assignment in Israel.Robert Ourlian is the foreign policy and national security editor for the Wall Street Journal's Washington bureau and has worked on many of the most significant issues of the past decade. A writer and editor for thirty-six years, he also has worked for the Los Angeles Times and earned journalism's George Polk Award while at the Detroit News, his hometown paper.
or
Not Currently Available for Direct Purchase
Copyright © 2020 American Booksellers Association