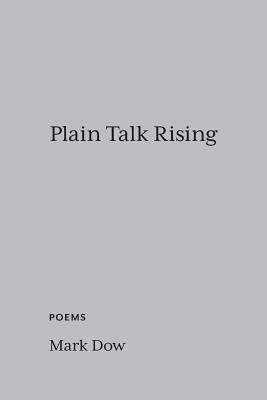 Mark Dow's Plain Talk Rising opens when a boy opens his eyes to his mother's already-inescapable presence. It ends with the possibility of endlessness when the mother touches her own pregnant belly and "for the first time he knows she knows he is there."

David Rosenberg (author of A Literary Bible and co-author with Harold Bloom of The Book of J) writes that Plain Talk Rising "transmutes poetry into prose, and then back again, like an alchemist let loose in a writing workshop that may set alight our era of MFA's for good."

The New Haven Review says that Plain Talk Rising is "able to make us feel our lived-in time and a kind of eternal time. . . . Dow's brilliant wordplay is equal to the stringent -- and playful -- task he sets himself."

Sentences, stanzas, lines, words, and even individual letters are forms which "make a man feel trapped and free." Syntax touches and delineates objects, ideas, and emotions evenly. "What's most invisible's the main thing, after all."

"Does everyone fight something without form, / something formless, I mean, something parsed / to powder mistaken for nothing while meanwhile / slipped above the radar and re-forming itself on / a wider perimeter, formlessness notwithstanding, / or is that just me?"

Before being "self-published," Plain Talk Rising was a finalist in the Colorado Prize, New Issues, and Yale Series competitions. It was a semi-finalist for the St. Lawrence Book Award from Black Lawrence Press. The poems in Plain Talk Rising were written between the mid-1980s and early 2000s.

A graduate of Yale University and the University of California at Irvine, Dow is also the author of American Gulag: Inside U.S. Immigration Prisons (California, 2004).

Erratum: Some copies of Plain Talk Rising may require the following correction: on p. 14, the penultimate line of the second stanza should read: ". . . To remember and forget are not two opposite acts here".]