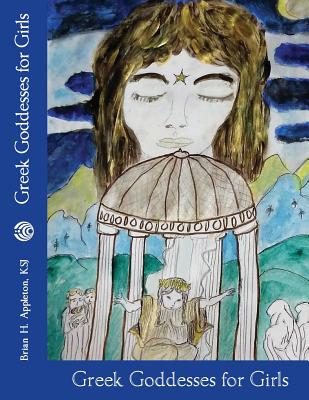 Greek Goddesses for Girls is an illustrated educational book of 68 original acrylic full color paintings by author intended to demonstrate to girls and young women the central role and importance of female in the Greco Roman religions, mythology and history which are central to our Western heritage.

The Greek deities have all the strengths and weaknesses of human beings but without the limitations and restrictions. They are able to marry siblings, have more than two parents, have numerous offspring which in the case of the Nereids was 5000 siblings.

Author believes Greek mythology remains relevant and vital today due to the profound understanding of human nature the ancient Greeks enjoyed. And always the mightiest of heroes would have one tragic flaw. Due to this intense understanding of the human condition transcending time, distance and advancement of technology, our psychology, science and modern languages are permeated with Greek words often of divine origin. Narcissist, Oedipal, Elektra complex, Herculean strength, Socratic method, Hippocratic oath and we continue to use Greek symbols like Caduceus, cornucopia, aegis or theatrical comedy and tragedy masks. Corporate logos use Pegasus or Athena's owl. Our fairy tails and fantasy films use mermaids, centaurs, unicorns, cyclops, Gorgon. So even if no one practices the ancient F=Greco Roman religions anymore they live on in our subconscious and I believe it is important for young people especially girls to appreciate and be familiar with Western heritage.

This book covers three generations of Greek Goddesses, starting with the creators or Protogenoi such as Gaea and Ananke, second generation, Titans and third generation, Olympians. It tells the story of the Titanomachy or war between the Titans and the Olympiads and the roles of lesser goddesses in it such as Iris and Arce.

The book covers the daunting task of kinship; teh parentage of each goddess as well as husbands, lovers and children and how they are all inter-related as well as the main events in their lives. It includes the better-known goddesses like Hera, Aprhrodite, Athena, Demeter, Persephone, Artemis, Hestia, the Three Graces and the 9 Muses and their main centers of worship and temple sin the Hellenistic World and Magna Grecia including Sicily and Southern Italy. It covers main religious practices, beliefs, festivals and rites such as the oracles, especially Delphi and the Greek's relationship to trance, death and afterlife.

The book also covers goddesses important in Western art, literature, theater and poetry like Medea, Elektra, Medusa, Sirens, Circe and Calypso from the Odyssey and the role of Goddesses in the Iliad and the Aneid as well as the stories of Panacea and of the creation of the first mortal woman Pandora. A great deal of attention is paid to important but lesser known goddesses such as Mnemosyne, teh Moirai, the Horae, Arethusa, Asteria, Ate, Doris, Phoebe, Thenis, Theia, Tethys, Antheia, Amphitrite, Eris, the Erinyes, Hebe, Hecate, Selene, Cyrene, Eos and others and high points in their lives.

The main goal is to give girls a sense of empowerment thru understanding the importance of female in our Greco Roman heritage in an accessible rather than aloof and purely academic way. The author seeks to make the goddesses live on in the minds and imaginations of girls.

There will be an accompanying black and white coloring book edition for younger children entitled Greek Goddesses for Girls; the coloring book and the author will be coming out with future editions in Greek, Italian, French, Spanish and Persian.