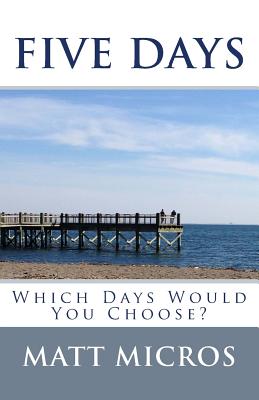 Which Days Would You Choose?

After a particularly frustrating day at work, high school math teacher, Mike Postman's afternoon walk along the Connecticut shoreline is interrupted by the screams of a boy who has fallen in off the pier and can't swim. Mike dives into the cold waters, saving the boy, but drowning himself in the process. And yet, because of the heroic way he died, he is given the opportunity to go back and re-live any five days of his life. They can be days he enjoyed and wants to re-experience, or days in which he had regrets and wants to make amends. The days he chooses, end up not being just days that impacted his life, but also days that had an impact on history. Reminding us where we were during events both inspiring and tragic, Five Days forces you to ask yourself, "Which days would you choose?

MATT MICROS received a B.A. in American Studies from the University of Notre Dame and his M.S. in Television, Radio and Film from Syracuse University's Newhouse School of Communications, before working in television production in Los Angeles for nearly a decade. He followed that with a stint at Creative Artists Agency, before returning to the East Coast. Five Days is his 3rd novel, following The Knights of Redemption and The Chameleon. He currently resides in Stratford, Connecticut with his wife, Katy, and their crazy yellow lab, Mr. Beans.
Loading...
or support indie stores by buying on