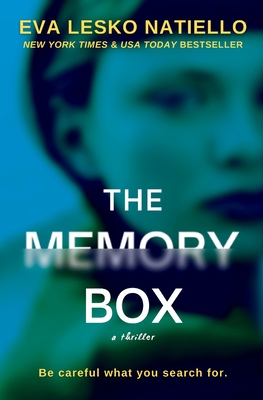 What if you Googled yourself and discovered something shocking?

In this gripping psychological thriller, a group of privileged suburban moms amuse themselves by Googling everyone in town, digging up dirt to fuel thorny gossip. Caroline Thompson, devoted mother of two, sticks to the moral high ground and attempts to avoid these women. She's relieved to hear her name appears only three times, citing her philanthropy. Despite being grateful that she has nothing to hide, a delayed pang of insecurity prods Caroline to Google her maiden name-which none of the others know.

The hits cascade like a tsunami. Caroline's terrified by what she reads. An obituary for her sister, JD? That's absurd. With every click, the revelations grow more alarming. They can't be right. She'd know. Caroline is hurled into a state of paranoia-upending her blissful family life-desperate to prove these allegations false before someone discovers they're true.

The disturbing underpinnings of The Memory Box expose a story of deceit, misconceptions, and an obsession for control. With its twists, taut pacing, and psychological tenor, Natiello's page-turning suspense cautions: Be careful what you search for.

Praise for THE MEMORY BOX:

"...Be prepared to toss that suburban fairy tale away, grab on to the steering wheel, and hope that you get through this obstacle course with all of your mental faculties. Natiello shows tremendous talent and courage in her creation of a powerful dichotomy, reaching beyond boundaries." -- San Francisco Book Review

"Epically creepy. . .creepier than Gillian Flynn's Gone Girl. After the last word, I had to take a deep breath, and think of cute, comforting things, like kittens and baby hedgehogs to stop the chills running through me." -- Sally Allen, Hamlethub

"The Memory Box is a literary rarity." -- Sidney Offit, author Memoir of the Bookie's Son

"Could not put this book down." -- Jessica Collins, Books, Ink's

"In her impressive first novel, THE MEMORY BOX, Eva Lesko Natiello tells the fascinating story of a woman whose memories piece together a self-portrait she doesn't recognize--until those memories yield to the terrible secrets they conceal."-John Biguenet, author of The Torturer's Apprentice and Oyster

". . . this one comes along and tears to shreds everything you thought you knew about the genre . . . and just when you think the book may have hit the limits of its genre, another sinister twist pushes it into serious Gone Girl territory." --Bustle

Eva Lesko Natiello is an award winning author and graduate of The State University of NY at Albany where she received a degree in psychology. She was born in Yonkers, NY and currently lives in suburban New Jersey with her husband and two children. Ms. Natiello's debut psychological thriller, THE MEMORY BOX, is a recipient of Houston Writers Guild 2014 Manuscript award. When not writing suspense novels, Ms. Natiello enjoys writing humorous musings about life's ironies, which can be found on her blog. Her short story, The Wordsmith, was a finalist in The Writer Magazine 2012 Best Short Story. Ms. Natiello is at work on her next novel.
Loading...
or support indie stores by buying on