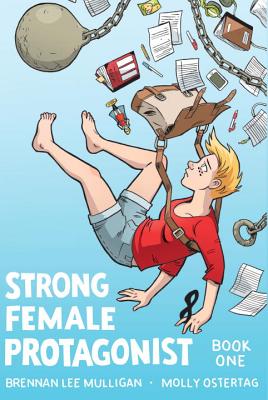 With superstrength and invulnerability, Alison Green used to be one of the most powerful superheroes around. Fighting crime with other teenagers under the alter ego Mega Girl was fun — until an encounter with Menace, her mind-reading arch enemy, showed her evidence of a sinister conspiracy, and suddenly battling giant robots didn't seem so important. Now Alison is going to college and trying to find ways to help the world while still getting to class on time. It's impossible to escape the past, however, and everyone has their own idea of what it means to be a hero....
After a phenomenal success on Kickstarter, Brennan Lee Mulligan and Molly Ostertag bring their popular webcomic into print, collecting the first four issues, as well as some all-new, full-color pages!

Brennan Lee Mulligan is a writer, actor and improviser based in Los Angeles. He performs, writes and teaches at the Upright Citizens Brigade Theater, acts and directs for Story Pirates, and has had his work optioned, purchased and produced by production companies in LA and NYC. His acting work has been featured on Funny or Die, Above Average, College Humor and the New York Fringe Festival, and he owns well over 5 swords.

Molly Ostertag lives in Los Angeles and works at Disney. She draws Strong Female Protagonist and many other comics, including Shattered Warrior from First Second, Castoffs from Roar, and The Witch Boy from Scholastic (fall 2017). She's been drawing SFP since sophomore year at the School of Visual Arts, and it's been quite a journey! She has a perfect cat, is a snappy dresser, and can cook a great steak.
Loading...
or
Not Currently Available for Direct Purchase