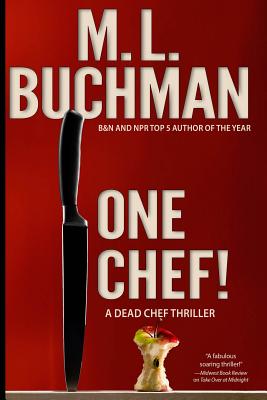 When the recipe calls for death, you need secret ingredients. Fast

Kate Stark owns the #1 cooking network on television. When a chef and a guest judge die on the air, all fingers point to her. But Kate faces her own problems: Five years ago, while a Special Agent in the U.S. Secret Service, she busted a major North Korean currency counterfeiting ring.

From New York TV studios and the Chrysler Building penthouse suite to the Panama Canal and a DPRK smuggling ship, Kate races to stay alive and recruit her team: a geek, a Marine, her con-man twin brother, and a very handsome guest judge. Death toll so far? ONE CHEF

M. L. Buchman has over 25 novels in print. His books have been named Barnes & Noble and NPR "Top 5 of the year" and Booklist "Top 10 of the Year." He writes thrillers, fantasy, and romance. In among his career as a corporate project manager he has: rebuilt and single-handed a fifty-foot sailboat, both flown and jumped out of airplanes, designed and built two houses, and bicycled solo around the world. He is now making his living full-time as a writer, living on the Oregon Coast with his beloved wife. He is constantly amazed at what you can do with a degree in Geophysics. You may keep up with his writing at www.mlbuchman.com.
Loading...
or support indie stores by buying on