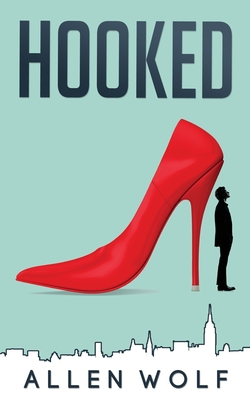 Desperate to find a soulmate in New York City, Shawn goes on one awkward date after another until he encounters the alluring Violet. He starts dating her, but his autism keeps him from realizing she's actually a prostitute. Drawn in by his kindness, Violet appreciates Shawn's quirky nature but conceals what she does after dark. Shawn thinks he found his soulmate while Violet thinks she found a ticket to a new life.

"Wolf, an award-winning filmmaker, has adapted this first novel from his own original screenplay, and its cinematic potential clearly shows. The high-concept narrative is entertaining, well-paced, and highly visual ... It's a charming, humorous, and hopeful tale. A quirky, touching love story that offers insights into autism, religion, and personal tragedy." - Kirkus Reviews

"A wonderfully well-written, funny, romantic love story. Unique and inspirational. Hooked is not your average romance. Rarely do I find myself so captivated by a book that I cannot put it down for nearly two hours. Pick up this book and get lost in the beauty of their relationship. My only complaint would be that the story had an ending, as all stories do, and I did so want to keep reading on. Most highly recommended. Hooked is simply remarkable." - Readers' Favorite

"By turning conventions of contemporary romance on its stilettos and swapping out the typical sassy, fashion-obsessed female protagonist for an autistic male who reads jokes from index cards, Wolf puts a fresh spin on the genre. Adapted from his award-winning screenplay, Hooked shows signs of its origins with snappy dialogue and humorous, well-staged scenes ... A sweet and entertaining romantic comedy, Hooked touches on autism and the power of faith. It will appeal to any reader who enjoys a blend of quirky characters, humor, and drama." - Blue Ink Review

"Heartfelt, out-of-the-ordinary romance ... This warm, witty story does not shy away from serious themes like exploitation, redemption, and true love. Hooked explores heavy issues with a light touch. It's easy to see this being adapted into an enjoyable movie ..." - Foreword Reviews

“Wolf, an award-winning filmmaker, has adapted this first novel from his own original screenplay, and its cinematic potential clearly shows. The high-concept narrative is entertaining, well-paced, and highly visual … it’s a charming, humorous, and hopeful tale. A quirky, touching love story that offers insights into autism, religion, and personal tragedy.” -- Kirkus Reviews

Love is one of the most powerful and mysterious forces in the world. In Hooked, Allen Wolf explores the depth of this binding force in hilarious and inventive ways, and makes us think about what it is that brings two unlikely people together.
— Tom Zoellner, Author of The Heartless Stone: A Journey Through the World of Diamonds, Deceit and Desire

A very sweet and endearing romantic comedy, with an excellent relationship between Violet and Shawn at the center.
– The Black List

Hooked is a sweet, touching story that works to bring out the best in people, using autism as a backdrop.
– Tracking Board

A lot of heart, poignancy and charm.
– Coverage Ink

Allen Wolf has won multiple awards for his storytelling as a feature film writer, director and producer. He married a Persian princess and they are raising their precocious daughter together while expecting a son. He enjoys travelling around the world and hearing people's life stories. The screenplay upon which his novel Hooked is based has won numerous accolades. His first feature film, In My Sleep, was released throughout the world, won multiple film festivals and is available on Amazon and iTunes. Allen is also a multiple award-winning board game creator. His games - You're Pulling My Leg!, Slap Wacky, JabberJot, Pet Detectives and You're Pulling My Leg! Jr., - have won 38 awards and are available on Amazon. Allen graduated from New York University's film school where his senior thesis film, Harlem Grace, won multiple festival honors and was a finalist for the Student Academy Awards. Allen cherishes reading to his daughter, traveling with his family, chocolate and visiting Disneyland.
Loading...
or support indie stores by buying on
(This book is on backorder)