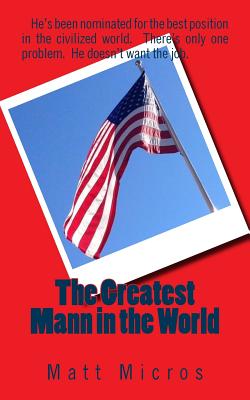 The Greatest Mann in the World (Chameleon #2)

Andy Warhol once said, "Everyone wants to be famous", to which photographer, Nat Finklestein responded, "Yeah, for about 15 minutes, Andy." That was certainly true for John Mann, who after skyrocketing into the national spotlight as "The Chameleon", decided to drift back into a life of relative obscurity. In the sequel, we fast forward 8 years to Americans waking up one December morning to find it is snowing in Southern California, sunny and 80 degrees in our nation's capital, and pitch black in Seattle in the middle of the day. All are the result of a freak tilt in the earth's axis that is unlikely to correct itself anytime soon. The resulting environmental shift throws an already weak economy into further disarray during a Presidential election year. Unhappy with both major political parties, a billionaire businessman springs onto the scene and funds a party that will accept nominations for the highest office in the land from any U.S. citizen. All eyes suddenly settle once again on Yale educated, high school administrator, John Mann. There's only one problem--he doesn't want the job.

Matt Micros received his B.A. in American Studies from the University of Notre Dame and his M.S. in Television, Radio and Film from Syracuse University's Newhouse School of Communications, before spending nearly a decade in Los Angeles working in television production. He followed with a stint at Creative Artists Agency before returning to the East Coast. The Greatest Mann in the World is his 5th novel, following the critically acclaimed, Five Days. Matt currently resides in Stratford, Connecticut with his wife, Katy, and their crazy but lovable yellow lab, Mr. Beans.
Loading...
or support indie stores by buying on