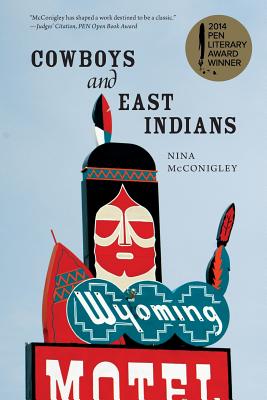 Set in Wyoming and India, the stories in Cowboys and East Indians explore the immigrant experience and collisions of cultures in the American West as seen through the eyes of outsiders. From Indian motel owners to a kleptomaniac foreign exchange student, a cross-dressing sari-wearing cowboy to oil-rig workers, an adopted cowgirl to a medical tourist in India - the characters in these stories are lonely and are looking for connection, and yet they can also be problematic and aggressive in order to survive in an isolated landscape. These stories focus on the not-often-mentioned rural immigrant experience. For these characters, identity is shaped not just by personal history but by place, the very land they live on.

Nina McConigley is the author of the story collection Cowboys and East Indians, which won the 2014 PEN Open Book Award and a High Plains Book Award. She was born in Singapore and grew up in Wyoming. She holds an MFA from the University of Houston and an MA from the University of Wyoming. She was named by Glamour Magazine as one of '50 Phenomenal Women Making a Difference' in 2014, and her book was named one of 2014's Best Prize Winning books by O, Oprah Magazine. She has been a fellow at the Bread Loaf Writers' Conference and held scholarships to the Sewanee Writers' Conference, and been nominated for a Pushcart Prize and for The Best New American Voices. Her work has appeared in The New York Times, Orion, Salon, Virginia Quarterly Review, American Short Fiction, and The Asian American Literary Review among others. She lives in Laramie, Wyoming and teaches at the University of Wyoming and at the MFA program at the Warren Wilson Program for Writers.
Loading...
or support indie stores by buying on