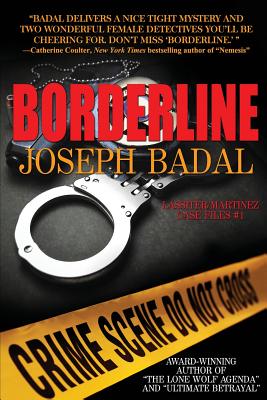 "Badal delivers a nice tight mystery and two wonderful female detectives you'll be cheering for. Don't miss 'Borderline.'" -Catherine Coulter, New York Times bestselling author of "Nemesis" In "Borderline," Joseph Badal delivers his first mystery novel with the same punch and non-stop action found in his acclaimed eight previous thrillers, including the 5-book Danforth Saga. Barbara Lassiter and Susan Martinez, two New Mexico homicide detectives, are assigned to investigate the murder of a wealthy Albuquerque socialite. They soon discover that the victim, a narcissistic borderline personality, played a lifetime game of destroying people's lives. As a result, the list of suspects in her murder is extensive. The detectives find themselves enmeshed in a helix of possible perpetrators with opportunity, means, and motive-and soon question giving their best efforts to solve the case the more they learn about the victim's hideous past. Their job gets tougher when the victim's psychiatrist is murdered and DVDs turn up that show the doctor had serial sexual relationships with a large number of his female patients, including the murder victim. "Borderline" presents a fascinating cast of characters, including two heroic female detective-protagonists and a diabolical villain; a rollercoaster ride of suspense; and an ending that will surprise and shock the reader. "'Borderline' grabs the reader early and never lets up. Opening with the discovery of the murder victim, a wealthy horsewoman full of sexual energy, gorgeous-and universally hated-the mystery progresses to an amazing revelation. Author Joseph Badal fills the pages with solid police work, a handsome private eye, an out-of control teenager and secret X-rated videos. In the hands of this fine writer, the story carried me along every step of the way." -Anne Hillerman, Author of the New York Times bestsellers "Spider Woman's Daughter" and "Rock with Wings.

Prior to a long finance career, including a 16-year stint as a senior executive and board member of a NYSE-listed company, Joseph Badal served for six years as a commissioned officer in the U.S. Army in critical, highly classified positions in the U.S. and overseas, including tours of duty in Greece and Vietnam, and earned numerous military decorations. He holds undergraduate and graduate degrees in business and graduated from the Defense Language Institute, West Coast and from Stanford University Law School's Director College. Joe now serves on the boards of several companies. He is the author of eight published suspense novels, including "The Lone Wolf Agenda," released in 2013 and named the top Mystery/Thriller novel in the 2013 New Mexico/Arizona Book Awards competition, and "Ultimate Betrayal," released in 2014 and named the Tony Hillerman Award Winner for Fiction in the 2014 New Mexico/Arizona Book Awards competition. "Borderline" is his first mystery. He also writes a monthly blog titled Everyday Heroes, and has written short stories published in the "Uncommon Assassins," "Someone Wicked," and "Insidious Assassins" anthologies. Joe's next novel, "Death Ship," the fifth in his Danforth Saga, will be released in October 2015. Joe has written dozens of articles that have been published in various business and trade journals and is a frequent speaker at business, civic, and writers' events.
Loading...
or support indie stores by buying on