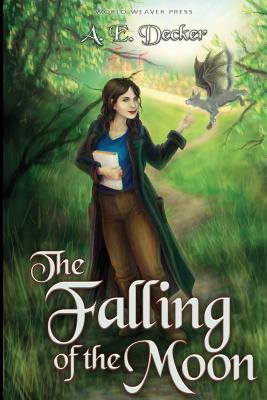 The Falling of the Moon

In the gloomy mountains of Shadowvale, Ascot Abberdorf is expected to marry a somber Count and settle down to a quiet life terrorizing the villagers. Instead, she heads to the Kingdom of Albright with the family silverware, her faithful bat-winged cat, and a book of fairy tales that promises she can find True Love and Happily Ever After, if she only follows her heart. The queen has announced a competition for the hand of the prince, and armed with the stories in her fairy tale book, as well as a true-love-detecting magic ring she picks up along the way, Ascot is sure she'll be able to win Prince Parvanel's heart.
But when she arrives, nothing turns out quite like her book of stories promised. The prince is more interested in frogs than in the potential princesses, and there's a guild of Godmothers whose motivations may not be so pure. Most annoying of all is the captain of the guard who swears he'll see the moon fall before she weds Prince Parvanel. As the competition turns into a parade of shifty shenanigans, Ascot realizes if she wants a happy ending, she might just have to write it for herself.

A. E. Decker hails from Pennsylvania. A former doll-maker and ESL tutor, she earned a master's degree in history, where she developed a love of turning old stories upside-down to see what fell out of them. This led in turn to the writing of her fantasy novel, The Falling of the Moon. A graduate of Odyssey 2011, her short fiction has appeared in such venues as Beneath Ceaseless Skies, Fireside Magazine, and in World Weaver Press's own Speculative Story Bites. Like all writers, she is owned by three cats. Come visit her, her cats, and her fur Daleks at wordsmeetworld.com.
Loading...
or support indie stores by buying on