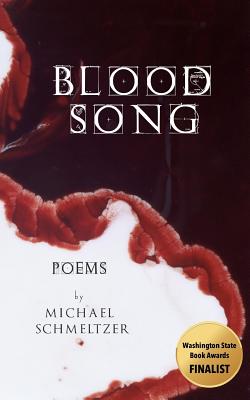 There is a radical nostalgia at the heart of Blood Song, a nostalgia that recovers the wounds of experience and brings it to a rich, imaginative culmination. In this way, the book's title is profoundly apt: on the one hand, Michael Schmeltzer's poems are about blood and the tragic consciousness that is the result of our being in time; on the other hand, the poems are about song, the reconciling artfulness that is the source of the best poetry. As one of Schmeltzer's canny speakers says, "I know / better. I'm no better." Equally unsettling and ravishing, Blood Song is a terrific debut. - Rick Barot author of Chord

In Michael Schmeltzer's Blood Song we are confronted with the thrumming and violent fact of the body's music. From the haunting image of a father's wounded stomach, the metamorphosis of hornets into syringes, and the consolation passed to a grieving parent, we emerge from the book able to name our ghosts. Schmeltzer's poems are haunting love songs sung to children before sleep in the face of all the world's calamities. Poem after poem of this startling debut is filled with a tenderness capable of turning us to tinder.- Oliver de la Paz author of Post Subject: A Fable

Blood Song is a perfect title for Michael Schmeltzer's powerful first book. Blood spills out of a man's slashed belly "like an open cocoon." Blood ties family together, for good or ill. "If you turn tragedy into story / you can survive it" sounds like a prayer, but the tongue can't be trusted, words slip from one to another: "scream" to "squirm," "insect" to "inflict," "hear and know" to "here and now." Familiar consolations fail: "How swiftly music / turns to stench; the things we cherish / how quickly they fly out of reach." And: "Not every movement is dance, / not everything swallowed sustenance." Images of salvation quickly become something else-a child freed from a closet's darkness sees "the bright blue throb of blue sky / with one cloud / marring it, / a dead dove / in the mouth of sky." It is no small thing, then, when the speaker looks around himself and says, "None of us are dead yet." This is a vision of what it is to be human that doesn't flinch from the hardest truths of what that includes: violence and rage and pain, but also tenderness and humor, innocence as well as experience. The poems themselves are evidence of the hard-won pleasures of making something of all that: making work, making love, making a family, making a meaningful life. - Sharon Bryan author of Sharp Stars

In Blood Song, elegy continually resurrects the shadows, echoes, and misplaced memories of loss. Here, clouds cross the sky like a funeral procession, words brighten in the mouth, and children both bless and burn the innocence that most resembles them. Story is what we make of our survival, Schmeltzer tells us-we who see our sorrows hatching in each line. We who set fire to the nest as if the light we see could save us. - Traci Brimhall author of Our Lady of the Ruins

Schmeltzer's poems wonder at the world as they grasp for the sacred, which may or may not be discovered. As the speaker states in Elegy/Elk River, "I've been here most of my life // and am no less lost." A keen-eyed biography boring into the cruelties we endure and inflict upon each other and ourselves, Blood Song sings with vibrant imagery and euphonic music. A familial vein interweaves these poems which stir us to wonder, what darknesses do we inherit as we hum along in our "minor key of existence?"- Matt Rasmussen author of Black Aperture