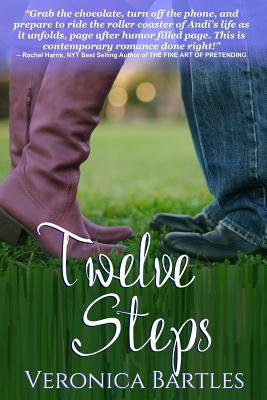 When her crush asks her to fix him up with her perfect older sister, sixteen-year-old Andi decides it's time to step out of the shadows. She creates a twelve-step program for second-class siblings to help her steal the spotlight, and the guy, from her sister, Laina. Step 1: Admit she's powerless to change her perfect sister, and accept that her life really, really sucks. Step 4: Make a list of her good qualities. Even if all she's got going for her is really great hair. Step 7: Demand attention for more than just the way she screws things up. But when a stolen kiss ends in disaster, Andi realizes that her prince isn't as charming as she'd hoped. And as Laina's flawless facade begins to crumble, Andi discovers that the spotlight she's been trying to steal isn't really the one she wants. The sisters will have to work together to find a spotlight big enough for them both to shine.

Veronica Bartles is the author of TWELVE STEPS and the upcoming picture book, THE PRINCESS AND THE FROGS (coming November 15, 2016 from Balzer & Bray / Harper Collins). She's an incurable optimist who loves gray, drizzly days, because that's when rainbows come to visit. Veronica is represented by Jessica Sinsheimer (Sarah Jane Freymann Literary Agency, LLC), and is a member of the Society of Children's Book Writers and Illustrators and the OneFour KidLit group. She's been a mentor in Pitch Wars (both for MG and YA) for the past three years, and she hosts the #PubTalkTV Twitter Party. You can find out more about her at http: //vbartles.com
Loading...
or support indie stores by buying on