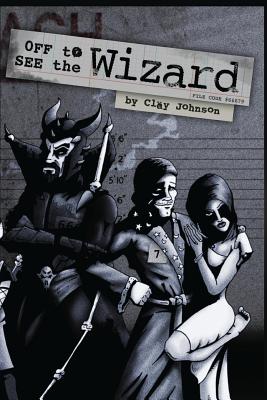 Off to See the Wizard

At the end of most heroic quests, after a plucky band of heroes has averted the apocalypse, all is well, and everyone lives happily ever after... (until the next book in the series.) Now, for the first time, readers get an in depth look into what really happens after the quest. This is the collected case file of the Grand Inquisitor's investigation into the Misery Reach debacle. Read first hand as the participants try to explain their actions and make their case. Did the Demon Lord Krevassius really try to end the world just to impress a girl? Would everyone be better off if the Wizard Galbraith hadn't invented a quest in order to stave off criticism? And what about an elf queen peeing on a Minotaur? A swordsman's losing battle with a young raccoon? And the transvestite assassin with a heart of gold?

Clay Johnson received an MFA from an old man running a forged documents booth under the 8th street bridge. When he's not out saving the world as an international super spy and master of kung fu, he makes graphics and animation for a TV station. Clay lives with his wife and daughter in New Hampshire.
Loading...
or
Not Currently Available for Direct Purchase