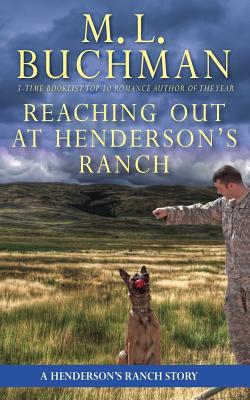 Reaching Out at Henderson's Ranch

A puppy at a snowed-in Montana ranch reminds a wounded Navy SEAL war dog handler that he has a purpose in life.

A Navy SEAL without an arm is as useful as...

Stan Corman hates waking up each morning to discover he's lost an arm, his war dog, his teammates, and his calling. The only thing worse? Going to sleep to face the nightmare of that single, life-changing moment.

Mark Henderson sends Stan to his family horse ranch beneath Montana's Big Sky. Not one shard of hope remains until Bertram, a Malinois puppy left on his doorstep, has different ideas about Reaching Out at Henderson's Ranch.

M. L. Buchman has over 40 novels in print. His military romantic suspense books have been named Barnes & Noble and NPR "Top 5 of the year" and twice Booklist "Top 10 of the Year," placing two titles on their "Top 101 Romances of the Last 10 Years" list. He has been nominated for the Reviewer's Choice Award for "Top 10 Romantic Suspense of 2014" by RT Book Reviews. In addition to romance, he also writes thrillers, fantasy, and science fiction. In among his career as a corporate project manager he has: rebuilt and single-handed a fifty-foot sailboat, both flown and jumped out of airplanes, designed and built two houses, and bicycled solo around the world. He is now making his living as a full-time writer on the Oregon Coast with his beloved wife and is constantly amazed at what you can do with a degree in Geophysics. You may keep up with his writing by subscribing to his newsletter at www.mlbuchman.com.
Loading...
or support indie stores by buying on