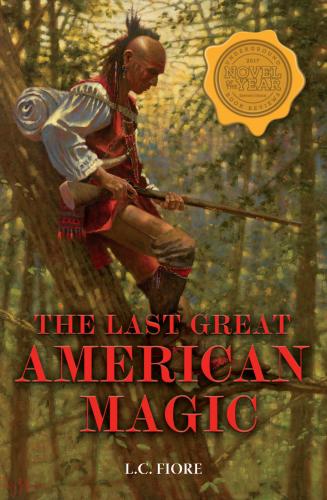 Some men are born heroes.

By the late eighteenth century, the lush river valley of the Ohio Country is the last stronghold of the Shawnee Indians, a deeply religious tribe whose medicine men practice the blackest and most potent magical arts. The Last Great American Magic reimagines the legend of Tecumseh, a physically gifted warrior, groomed from birth to one day lead, and his twin brother Rattle, a wickedly smart but lazy prophet with blossoming supernatural gifts. Growing up, the boys are rivals, but in adulthood they reconcile in hopes of assembling a confederacy of Native American tribes to drive back the ruthless advance of white settlers and reclaim the land they once called home.

If you think you know the legend of Tecumseh, think again.

"In his splendid new novel, L. C. Fiore reimagines the legendary warrior Tecumseh as he fights to preserve a way of life on the verge of extinction. In prose that is itself almost magical, Fiore takes us into the Shawnee culture of post-colonial America, where two brothers, the warrior and the Prophet, vie for power, even while at war with the new American nation. But this is not just a novel about war. It's a story about family and coming of age, about finding one's mission in life. It's also a love story between Tecumseh and the beautiful white hostage who wants to convert him to her faith and instead captures his heart. Fiore brilliantly conjures this lost world as if he's lived in it. Through his perceptive eyes, this is a journey into the past well worth taking."
--Miriam Herin, author of A Stone for Bread

"Between the American Revolution and the War of 1812, Shawnee warrior Tecumseh is caught in the web between the old ways and white man's, and runs the gauntlet between love and honor. With his prankster spirit guide and his shaman brother, Tecumseh sets out to unite the tribes to reclaim their land from the white settlers. Could the tribes succeed or would the movement be snuffed out? From the finest strands of magical realism, Fiore has woven a historical re-imagining of Tecumseh's War, where the reader is so perfectly caught, he forgets he already knows how Tecumseh's story ends."
--Cristel Orrand, author of Khayal

LC Fiore's debut novel Green Gospel (Livingston Press) was named First Runner-Up in the Eric Hoffer Book Awards (General Fiction); short-listed for the Balcones Fiction Prize; and long-listed for the Crook's Corner Book Prize. His short fiction has appeared in Ploughshares, Michigan Quarterly Review, New South, and storySouth, among many others, and has been anthologized in Sudden Flash Youth: 65 Short Short Stories (Persea Books) and Tattoos (Main Street Rag). His work has also appeared on NPR, TriQuarterly Review, and in various baseball publications. He is the communications director for the North Carolina Writers' Network and lives in Durham, NC, with his wife and daughter.
Loading...
or support indie stores by buying on