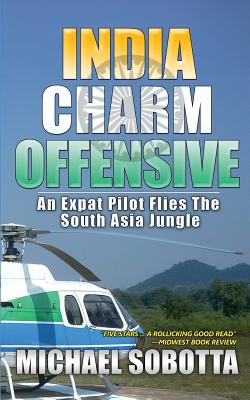 "Exuberant--and funny--without neglecting the seriousness of surviving a year of love and war." --Kirkus Reviews

Here, we enjoy a triple feature: excellent writing, fascinating stories, and learning the rich first-hand experience of an American contract helicopter pilot. Sobotta provides a humorous autobiography of his time working and flying on government missions in India, and it documents his first year there when culture shock was at its strongest.

The bureaucratic process that pervades Indian society, shooting incidents, the trials of an ancient land with thousands of gods--plus other recipes for personal and professional disaster--vie with the tastes, sounds, and colors that make up India. This book reveals to readers not just accounts of helicopter aviation or politics, but an immersion into a strange new world.

As the author traveled around different parts of India, rural and urban, interacting with its people, he slowly moved beyond colossal cultural differences to a real sense of the country and its incongruities and wonders. Readers along for the ride can expect a journey filled with the turbulence that is India's psyche--but a journey also peppered with revealing and astonishing encounters that capture India's nuances and flavors.

Sobotta has a talent for storytelling and eliciting a chuckle, the result blends high flying adventure with expat experiences in a narrative that requires little familiarity with India or aviation. All that is required is an interest in this exotic country and in a rollicking good read that candidly portrays a series of startling, often hilarious encounters with India's people, politics, and unique world.