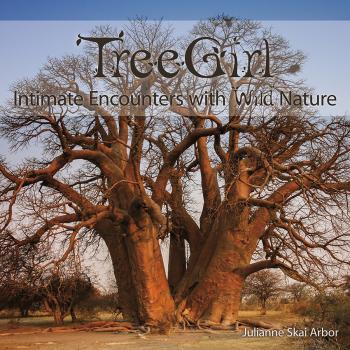 We enjoy being lost—or perhaps found—in wildness and the grandness of Nature. TreeGirl brings us there. In the award-winning TreeGirl: Intimate Encounters with Wild Nature, Julianne Skai Arbor, a.k.a. TreeGirl–photographer, certified arborist, conservation educator and forest ecotherapist–invites us into intimate contact with fifty magnificent tree species from her adventures in thirteen countries on four continents. Using a remote-control timer and a tripod, she photographs herself and others in sensual connection with the trees of the world.

Weaving fine art photography, natural history, nature connection, conservation, and the ecopsychology of the human-tree relationship, this book is an invitation to heal from the madness of modern civilization and rewild ourselves by cultivating our own intimate relationship with Nature. Each tree species, which is organized alphabetically by common name, includes one to four photographs, the tree's natural history, ethnobotany and conservation status, and a narrative caption of TreeGirl's encounter with the tree she photographed. Five essays holistically address aspects of the human-tree relationship: the sensual (physical), the biophilic (ecopsychological), the arboricultural (ecological), the archetypal (spiritual) and the practical (therapeutic). "Lovers" tells a dreamy tale TreeGirl's sensual and transmutational encounter with a tree; "Tree Affinity" explains the biology and psychology of why we are attracted to trees; "Touch Trees" examines a holistic view of arboriculture (the science of taking care of trees); and "The Goddess and the Green Man" is the story of TreeGirl's own spiritual encounters with trees as female and male Nature archetypes. The last chapter, "Rewilding," offers seven accessible ways in which almost anyone can connect with Nature to rewild themselves.

The book is forworded by Fred Hageneder, German tree authority, author and musician. Thoroughly researched and stunningly illustrated with over 150 color photographs, this interdisciplinary coffee table book, is an inspiration and a resource for any tree lover.

TreeGirl is the 2017 Nautilus Book Award Winner for Photography and Art.

"A conservationist and art photographer explores the erotic aspects of trees. For more than 20 years, Arbor has been creating intimate photos of trees and people together. The humans, which include herself and others, are nearly always nude, and the folds and curves of their bodies harmonize with the sinew of the trees. In one, the author prostrates herself, as if on an altar, along a platform at the base of a 285-foot mountain ash; in others, she reclines on a willow that appears as though it’s bending to drink at a nearby pool or nestles in the crook of a windblown Cyprus, the curve of her back in perfect accord with the outermost bough’s lurch to the left. In one black-and-white photo, she molds herself to the basal furl of an enormous fig tree, pressing her palms and her cheek against its bark, looking like something from the pages of Ovid’s Metamorphosis. “For tens of thousands of years,” she writes, “people took refuge under trees, held council under trees, and depended upon trees for survival.” Indeed, from even earlier. Anyone perusing Arbor’s book can’t help but feel eerily reminded of humanity’s distant ancestors—the earliest hominids—and how some of them would have lived nearly their whole lives in the vanished oaks and beeches of the Pliocene (“we lived in kinship with them,” she achingly writes of that forgotten past). Sometimes the models’ fetal poses in the trees drift toward the sentimental, à la Anne Geddes’ work, and some readers may be amused by the fact that sometimes the models are difficult to locate, bringing to mind Where’s Waldo? But such levity isn’t unwelcome, and it serves only to intensify the fact that humans can appear eerily camouflaged in nature. Fortunately, Arbor has a remarkable eye for how light and shadow shape the viewer’s experience of texture, and some pictures are every bit as powerful and haunting as Edward Weston’s images of bell peppers—or, for that matter, of trees. Forest giants from Tasmania to South Africa to Anatolia have never seemed so alive. A vital, visually stunning photographic volume." — Kirkus Reviews

“Rich in information, ardently anxious for conservation, and gifted in capturing these photographic images, this book...is a spiritual experience to view.” — Seattle Book Review

“The photographs she includes in this book are quite lovely, and the trees featured in them are some of the most remarkable species to be found anywhere on the planet.” — Johannes E. Ruitta, The Well-Read Naturalist.com

Julianne Skai Arbor, aka TreeGirl, has been on the forefront of the fields of ecotherapy and nature connection since she began creating self-portraits with trees in 1995. To date, she has intertwined with over seventy species of trees in thirteen countries. She is certified as an arborist with the International Society of Arboriculture, as a California naturalist with the University of California, and has taught interdisciplinary college-level conservation education for over ten years, including pioneering the first program in environmental arts. She holds graduate degrees in Environmental Education and Arts and Consciousness Studies. With her passion for trees she creates an experiential bridge to connect people with nature through forest ecotherapy, portrait sessions, and immersive nature retreats with trees around the world. She lives in Sonoma County, California amidst the native oak and coast redwood trees. Her gallery of images can be found at www.TreeGirl.org.