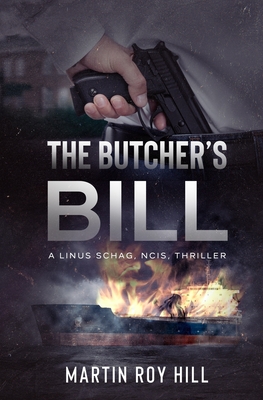 In Iraq, a shipment of $9 billion in cash goes missing. Each effort to find it ends in death. In Southern California, a mercenary's murder, a severed head, and a bloody hand-written message spark a massive manhunt.The man connecting these two events is William Butcher, aka The Butcher. Those who stole the money want him dead. The cops want him for murder. Butcher's only hope is his former NCIS colleague and closest friend, Linus Schag.Torn between loyalties, Schag walks the thin line between doing his job or betraying his friend. Working from opposite ends, Schag and Butcher peel back the layers of conspiracy, revealing a criminal enterprise reaching into the highest levels of government.With a plot torn from today's headlines, The Butcher's Bill will keep readers on edge until its final, explosive climax.

Martin Roy Hill spent more than 20 years as a national award-winning staff reporter, investigative journalist, and editor for newspapers and magazines before becoming a Navy analyst specializing in battlefield medical operations. His freelance credits include Reader's Digest, LIFE, Newsweek, Omni, American History, Coast Guard Magazine, Retired Officer Magazine, the Los Angeles Times Sunday Opinion Section, and many more. Much of his freelance work involves historical topics, especially military history. He was a lead contributor to the 1995 WWII anthology, "From Pearl Harbor to Nagasaki: America at War," published by the Retired Officer Association. He also contributed to the American Civil War anthology "Gettysburg: Three Days that Saved the United States," published by I-5 Publishing. Martin's short stories have appeared in such publications as Alfred Hitchcock Mystery Magazine, ALT HIST: The Journal of Historical Fiction and Alternative History, San Diego Magazine, Crimson Streets, Mystery Weekly Magazine, Nebula Rift, and others. His first book, DUTY, was named the Best Short Story Anthology/Collection by the San Diego Book Awards Association (SDBAA). His first novel, The Killing Depths, was a 2013 finalist for the SDBAA Sisters In Crime Mystery Award, as was Empty Places in 2014. Eden was a finalist for the SDBAA's Best Science Fiction book in 2015. A veteran of the Coast Guard and Navy reserves, Martin eventually retired from a component of of the California National Guard as a major in the military police. Martin also served as a tactically-trained medic with his local sheriff's wilderness search and rescue unit, and as a medic and security specialist with a federal Disaster Medical Assistance Team. Martin is a professional member of the Mystery Writers of America, Sisters in Crime, and International Thriller Writers.
Loading...
or support indie stores by buying on