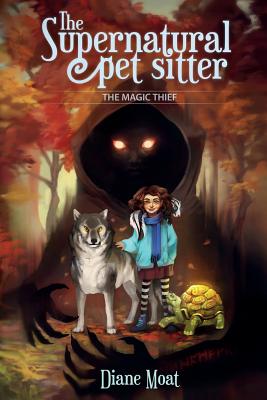 Every animal can talk to you. You just have to know how to listen.

Pepper Neely is better at this than most, especially because she is in charge of pet sitting all the familiars in her neighborhood. A familiar is a pet magically linked to a witch or warlock. As a gnome, Pepper is no stranger to spells and sorcery. She also knows that, despite their special name, familiars aren't all that different from regular animals. They get anxious when separated from their people, so Pepper uses her special gnome powers to calm them down. She watches Cranky the high-strung ferret, Frank the laid-back parrot, King Arthur the elderly tortoise, and many others.

Then, something terrible begins happening to the familiars. Someone is stealing their magic It not only prevents Pepper from communicating with them but breaks their magical connection with their people. When King Arthur's magic is stolen, his owner's powers stop working too. Pepper can sense that the tortoise is very scared.

In order to protect the animal's magic, Pepper decides to track down the culprit. With the help of her best friend, Luna, and her brother, Jax, Pepper fights to protect all of the special pets.