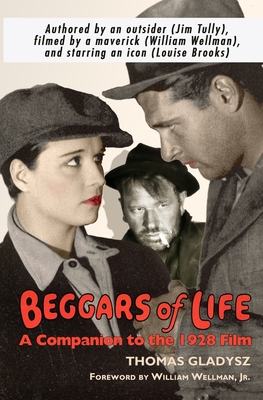 This first ever study of "Beggars of Life" looks at the film Oscar-winning director William Wellman thought his finest silent movie. Based on Jim Tully's bestselling book of hobo life-and filmed by Wellman the year after he made "Wings" (the first film to win the Best Picture Oscar), "Beggars of Life" is a riveting drama about an orphan girl (screen legend Louise Brooks) who kills her abusive stepfather and flees the law. She meets a boy tramp (leading man Richard Arlen), and together they ride the rails through a dangerous hobo underground ruled over by Oklahoma Red (future Oscar winner Wallace Beery). "Beggars of Life" showcases Brooks in her best American silent-a film the "Cleveland Plain Dealer" described as "a raw, sometimes bleeding slice of life." With more than 50 little seen images, and a foreword by William Wellman, Jr.

Thomas Gladysz is an author and film historian and the Director of the Louise Brooks Society (www.pandorasbox.com), which he founded in 1995. He has written numerous articles, essays and program notes on various aspects of the silent film era (including Louise Brooks), and authored / edited three books on the actress' films. Gladysz has organized related exhibits, contributed audio commentaries to two DVD/Blu-rays, and introduced Brooks' films around the world. He also programs RadioLulu.
Loading...
or support indie stores by buying on