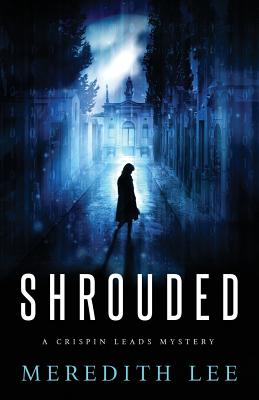 Insecure American graduate student Crispin Leads has come to the Vatican to study burial rituals and catch up with her oldest friend, Sister Lew, historian for the Shroud of Turin. Within hours of Crispin's arrival she witnesses a murder and is drawn into an investigation of multiple homicides. When Lew disappears, Crispin is accused of being involved. Although she doesn't trust him, Crispin accepts the help of a young priest, Roberto Rossini. The pair stay one step ahead of the police and a determined assassin as they try to unravel the mystery.

“Shrouded is a masterfully written mystery novel, powered by welldeveloped
characters and a sophisticated plot. Who stole the Shroud of
Turin, and what do they want with it? And who kidnapped our favorite
nun, Sister Mary Llewellyn? Crispin, our anxiety-ridden but
determined young sleuth, is on the case.” —David Aretha, awardwinning
author

Meredith Lee is the pen name for the Austin-based writing
team of Dixie Lee Evatt and Sue Meredith Cleveland. Their
process includes research trips to foreign counties to sample
wine and food and, when required, the occasional dramatic
performance of a scene to make sure it “works.”


A former political writer for the Austin AmericanStatesman,
Dixie later taught writing at the S.I. Newhouse
School of Public Communication at Syracuse University. While
there she published a book, along with colleagues, on the
communication practices of small organizations, Thinking Big.
Staying Small. When she teamed up with Sue to write fiction,
they sold a screenplay treatment to a Hollywood producer.
Although the movie was never made, they used the seed
money to found ThirtyNineStars, their publishing company.
They also produced a second screenplay based on the life of a
Waco schoolteacher who was imprisoned in World War I
because of his German heritage and his work with early radio
broadcasting. That screenplay, Wireless, was a finalist for the
Chesterfield Writer’s Film Project in 2003.


Sue is an award-winning artist who has worked in
multiple media including oil, watercolor and fiber. Her earliest
publications include articles advocating childbirth education
and humanizing hospital care. Shrouded, a mystery Sue
collaborated on with Dixie, was a finalist in the 2017 Writers’
League of Texas Manuscript Contest. One Slip Over the Line,
Sue’s work-in-progress Young Adult novel, was a 2015 finalist
in the Cynthia Leitich Smith Writing Mentor Award. Sue’s
essays, literary memoir pieces, and short stories have been
featured in award-winning literary journals, magazines, and
blogs. Wireless, a screenplay she collaborated on with Dixie,
was a semi-finalist for the 2003 Chesterfield Writer’s Film
Project. Sue has written two pre-published Middle Grade
novels: A Shadow Over Silver and Blue Water Over Dark
Secrets.