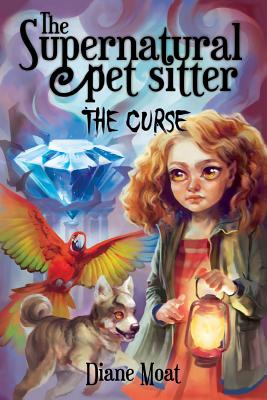 Pepper Neely is no stranger to dangerous situations. In The Supernatural Pet Sitter: The Magic Thief, the young gnome defeated an evil witch who was stealing magic from the Familiars that Pepper took care of. She wouldn't have survived without the intervention of a pack of werewolves, who endured painful, fiery spells to save Pepper's life.

Now Pepper is determined to repay the werewolves for their sacrifice, no matter what it takes. She decides to break the centuries-old curse that keeps them in wolf form. At first she keeps her plans a secret, but it's not long before Pepper realizes she will need all the help she can get to end this curse. Magic is everywhere as enemy witches cast dangerous spells to stop Pepper.

Pepper and her family must trust the local witches and work together with them to fend off the deadly spells, find the curse, and break it-before the hostile witches get the best of them.

Diane Moat lives in Tennessee and works as a nurse and legal professional. When not at work, she fosters Chihuahuas. Her six rescues inspired her to write The Supernatural Pet Sitter children's series, which features a gnome who can communicate with animals.
Loading...
or support indie stores by buying on