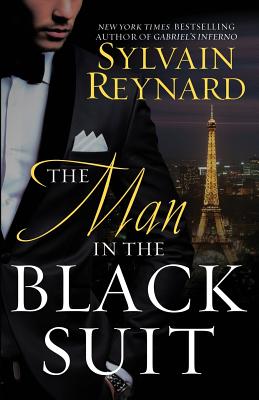 The Man in the Black Suit

Brazilian Acacia Santos excels at her job as concierge at the prestigious Hotel Victoire in Paris. When her senior colleague is attacked and sent to the hospital, she is tasked with serving one of the hotel's most mysterious and attractive guests.Nicholas Cassirer checks into the hotel under an assumed name every three months. Usually, he stays in the penthouse suite with a beautiful female companion but on this occasion, he arrives alone and is displeased in having to deal with someone new. A match of wits ensues as he tests Acacia's expertise with a series of almost impossible demands. Her intelligence and creativity rise to the challenge, earning his respect.They strike a tenuous accord until Acacia discovers a famous stolen painting in his suite. Compelled to report her discovery, she contacts a former boyfriend who works for the elite BRB, a unit of French law enforcement that deals with stolen art.Nicholas is questioned by police and released when it is revealed the painting is a reproduction. Irked with her behavior, Acacia's supervisor demotes her, threatening dismissal and the cancellation of her work permit.But Acacia has already attracted Nicholas's attention. Remorseful that she may lose her job on his account, he offers her a choice-she can wait until her supervisor dismisses her, or she can leave the city of lights behind and become his personal assistant.Acacia initially refuses his offer, but Nicholas is persistent. He reveals himself as a man who quietly acquires stolen art in order to restore it to its rightful owners. Faced with mounting familial debts and the possibility of dismissal and deportation, she agrees to work for him.Nicholas opens up a whole new world of beauty and intrigue to Acacia as they travel the globe. Soon the line between employer and assistant is blurred, and the two lonely people embark on a passionate relationship. Secrets and danger abound as Nicholas and Acacia try to solve the mystery of a piece of stolen art. But Acacia may prove to be the most dangerous mystery of all.

NEW YORK TIMES, USA TODAY AND #1 INTERNATIONAL BESTSELLING AUTHOR I'm interested in the way literature can help us explore aspects of the human condition - particularly suffering, sex, love, faith, and redemption. My favourite stories are those in which a character takes a journey, either a physical journey to a new and exciting place, or a personal journey in which he or she learns something about himself/herself. I'm also interested in how aesthetic elements such as art, architecture, and music can be used to tell a story or to illuminate the traits of a particular character. In my writing, I combine all of these elements with the themes of redemption, forgiveness, and the transformative power of goodness. I try to use my platform as an author to raise awareness about the following charities: WorldVision, Alex's Lemonade Stand, and Covenant House.
Loading...
or
Not Currently Available for Direct Purchase