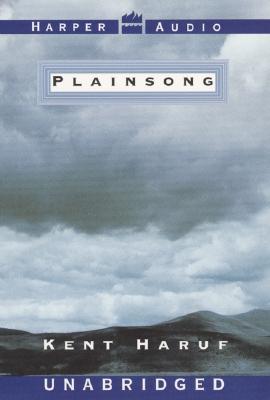 "With Plainsong, [Kent Haruf] has conjured up an entire community, and ineluctably immersed the reader in its dramas.  He has written a compelling and compassionate novel." - Michiko Kakutani, The New York Times

"Haruf's unforgettable tale is both emotionally complex and elemental, following, as it so gracefully does, the cycle of life, death, and rebirth." -Booklist

A heartstrong story of family and romance, tribulation and tenacity, set on the High Plains east of Denver.

In the small town of Holt, Colorado, a high school teacher is confronted with raising his two boys alone after their mother retreats first to the bedroom, then altogether.  A teenage girl - her father long since disappeared, her mother unwilling to have her in the house - is pregnant with nowhere to go.  And out in the country, two brothers, elderly bachelors, work the family homestead, the only world they've ever known.

From these unsettled lives emerges a vision of life, and of the town and landscape that bind them together - their fates somehow overcoming the powerful circumstances of place and station, their confusion, curiosity, dignity and humor intact and resonant.

Utterly true to the rhythms and patterns of life, Plainsong is a story to care about, believe in and learn from.

"Plainsong is nothing short of a revelation." - Richard Russo

Kent Haruf's The Tie That Binds received a Whiting Foundation Award and a special citation from the PEN/Hemingway Foundation.  Also the author of Where You Once Belonged, he lives with his wife, Cathy, in Murphysboro, Illinois, and teaches at Southern Illinois University at Carbondale.
Loading...
or
Not Currently Available for Direct Purchase