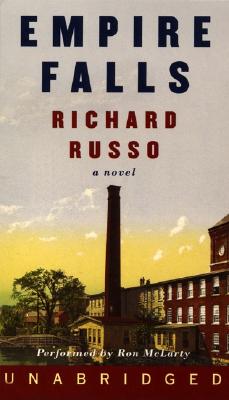 From his first novel, Mohawk, to his most recent, Straight Alan, Richard Russo has demonstrated great affinity for the tragicomic human condition, and here he expands his geographical and psychological claims on the small town, blue-collar heart of the country.

Empire Falls, Maine, has seen the inexorable failure of its logging and textile industries, the once mighty holdings of the Whiting clan, presided over by the last scion's widow, now mostly amount to decrepit real estate.

Miles Roby gazes over this ruined kingdom front the Empire Grill, an opportunity that has become the albatross of his ambitions. Brought home from college by family obligations-- his mother ailing, his father it loose cannon -- Miles himself now has a divorce to contend with, but also a beloved daughter to guide gently through adolescence.

Miles also proves an excellent guide to this hardscrabble, persistent community: fathers and sons and daughters, living and dead, rich and poor. Shot through with mysteries of generations and the shattering visitations of the nation at large -- Empire Falls is a social novel of stunning ambition, and a master storyteller's magnum opus.