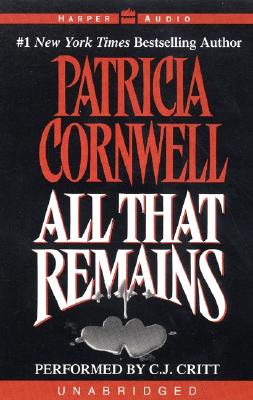 A serial killer is loose in Richmond, specializing in attractive young couples whose bodies are inevitably found in the woods months later -- minus their shoes and socks. After months of exposure to all the elements, all that remains of this killer's victims has in every case left Chief Medical Examiner Dr. Kay Scarpetta unable even to determine an exact cause of death. Frustrated that her high-tech forensic skills have apparently proved useless, Kay enlists the help of and ace crime reporter and a psychic whose powers have been vouched for by the FBI.

Racing against time, Kay finds she must draw upon her own personal resources to track down a murderer skilled at eliminating every clue. All that remains to her now is her courage and intuition and the will to stop a killer before he can strike again.

C.J. Critt is a much-admired audiobook performer who has appeared on and Off-Broadway, in stand-up comedy, solo performance, and poetry slams. She is a Cable Ace winner and staff writer for Radio Disney.