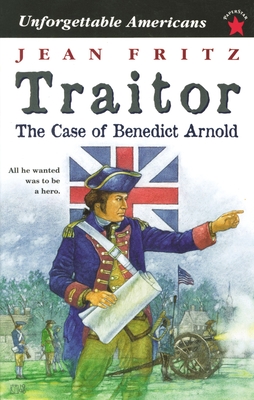 the Case of Benedict Arnold

Benedict Arnold always carried things too far. As a boy he did crazy things like climbing atop a burning roof and picking a fight with the town constable. As a soldier, he was even more reckless. He was obsessed with being the leader and the hero in every battle, and he never wanted to surrender. He even killed his own horse once rather than give it to the enemy.

Where did the extremism lead Arnold? To treason.

America's most notorious traitor is brought to life as Jean Fritz relays the engrossing story of Benedict Arnold -- a man whose pride, ambition, and self-righteousness drove him to commit the heinous crime of treason against the United States during the American Revolution.

“A highly entertaining biography illuminating the personality of a complex man.” —Horn Book
“A gripping story. . . As compelling as a thriller, the book also shines as history.” —Publishers Weekly

Praise For Traitor: the Case of Benedict Arnold…

★"Fritz gives excellent coverage of the confusion and individualism of the American colonies and the Revolutionary War effort.... This book could engender an understanding of the colonial period and, as shown by Arnold's life, the many considerations that affect adult decision-making". -- School Library Journal, starred review

"Fritz has made another lively, readable life story." --Kirkus Reviews

“A gripping story. . . As compelling as a thriller, the book also shines as history.” —Publishers Weekly

Acclaimed biographer, Jean Fritz, was born in China to American missionaries on November 16, 1915. Living there until she was almost thirteen sparked a lifelong interest in American history.  She wrote about her childhood in China in Homesick, My Own Story, a Newbery Honor Book and winner of the National Book Award.
Ms. Fritz was the author of forty-five books for children and young people. Many center on historical American figures, gaining her a reputation as the premier author of biographies for children and young people.
Among the other prestigious awards Ms. Fritz has garnered are: the National Humanities Medal, the Laura Ingalls Wilder Award, the May Hill Arbuthnot Lecture Award. the Christopher Award, the Boston Globe-Horn Book Non-Fiction Award, a New York Times Notable Book of the Year, and many ALA Notable Books of the Year, School Library Journal Best Books of the Year, and ALA Booklist Editors’ Choice Awards.
She passed away on May 14, 2017.
Loading...
or
Not Currently Available for Direct Purchase