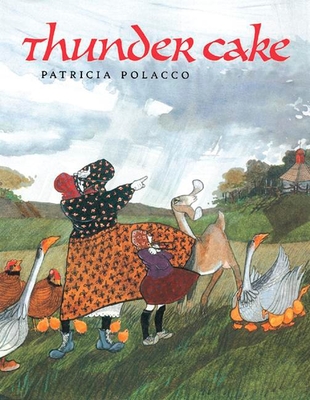 A loud clap of thunder booms, and rattles the windows of Grandma's old farmhouse. "This is Thunder Cake baking weather," calls Grandma, as she and her granddaughter hurry to gather the ingredients around the farm. A real Thunder Cake must reach the oven before the storm arrives. But the list of ingredients is long and not easy to find . . . and the storm is coming closer all the time!

Reaching once again into her rich childhood experience, Patricia Polacco tells the memorable story of how her grandma--her Babushka--helped her overcome her fear of thunder when she was a little girl. Ms. Polacco's vivid memories of her grandmother's endearing answer to a child's fear, accompanied by her bright folk-art illustrations, turn a frightening thunderstorm into an adventure and ultimately . . . a celebration!

Whether the first clap of thunder finds you buried under the bedcovers or happily anticipating the coming storm, Thunder Cake is a story that will bring new meaning and possibility to the excitement of a thunderstorm.