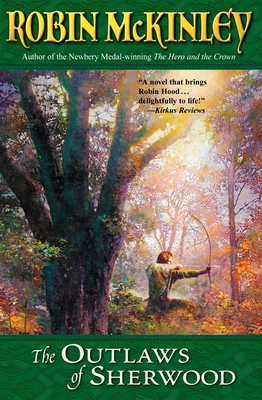 The Outlaws of Sherwood

Robin Longbow is a sub-apprentice forester in Sherwood Forest, barely eking out a living-and barely able to control his temper when he is confronted by the taunts of the Chief Forester's favorite. One careless shot, and he has killed the man. From then on, Robin is on the run-but he is not alone. Joined first by his friends Much and Marian, then by more and more people who despise the Norman lords who tax them blind, Robin builds a community of Saxon outlaws deep in Sherwood who risk the gallows and the sword for the sake of justice and freedom.

"In the tradition of T. H. White's reincarnation of King Arthur, a novel that brings Robin Hood . . . delightfully to life!" (Kirkus Reviews)

Praise For The Outlaws of Sherwood…

“Readers ready to think beyond stereotypes of glorious violence will find [this] Robin a hero for our times.”—Booklist

“In the tradition of T.H. White’s reincarnation of King Arthur, a novel that brings Robin Hood . . . delightfully to life!”—Kirkus Reviews