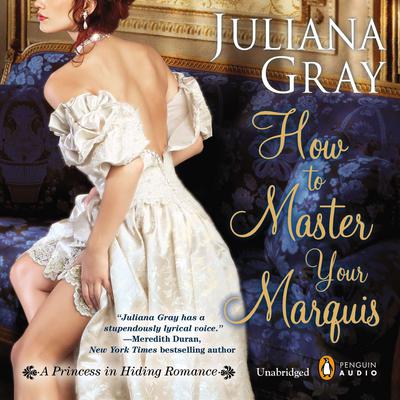 Of all her sisters, Princess Stefanie is by far the least amenable to law and order, which is why she’s appalled to find herself masquerading as an unbearably drab clerk for the most honorable barrister in England. But her dull disguise turns out to have its privileges: namely, the opportunity to consort unchaperoned with her employer’s exceedingly handsome nephew, James Lambert, the Marquess of Hatherfield.

Hatherfield quickly realizes that his uncle’s spirited new clerk is, in fact, a lovely young woman of daring habits. The outwardly impeccable marquis isn’t about to reveal her deception. After all, he’s hiding a dangerous secret of his own. But when one too many escapades with the madcap princess bring Hatherfield’s troubled past to light, it is only Stefanie’s sharp wits that stand between the marquis and utter disaster, and only Hatherfield’s daring that can save the princess from the shadowy agents bent on finding her.

Juliana’s debut romance trilogy, A Lady Never Lies, A Gentleman Never Tells, and A Duke Never Yields, won widespread acclaim, including the RT Book Review’s Seal of Excellence for August 2012.  As Beatriz Williams, she is also the author of Overseas and A Hundred Summers from G. P. Putnam’s Sons. She enjoys dark chocolate, champagne, and dinner parties, and adores hearing from readers.