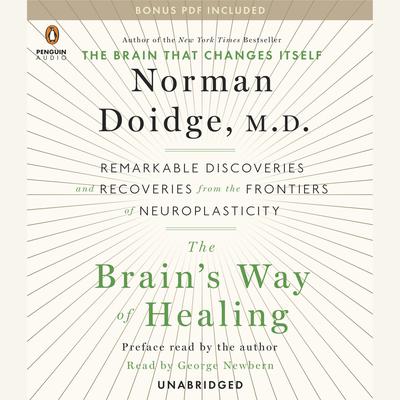 Remarkable Discoveries and Recoveries from the Frontiers of Neuroplasticity

The New York Times–bestselling author of The Brain That Changes Itself presents astounding advances in the treatment of brain injury and illness. Now a new afterword.

Winner of the 2015 Gold Nautilus Award in Science & Cosmology

In The Brain That Changes Itself, Norman Doidge described the most important breakthrough in our understanding of the brain in four hundred years: the discovery that the brain can change its own structure and function in response to mental experience—what we call neuroplasticity.

His revolutionary new book shows, for the first time, how the amazing process of neuroplastic healing really works. It describes natural, non-invasive avenues into the brain provided by the forms of energy around us—light, sound, vibration, movement—which pass through our senses and our bodies to awaken the brain’s own healing capacities without producing unpleasant side effects. Doidge explores cases where patients alleviated years of chronic pain or recovered from debilitating strokes that had plateaued; children on the autistic spectrum or with learning disorders normalizing; symptoms of multiple sclerosis, Parkinson’s disease, and cerebral palsy radically improved, and other near-miracle recoveries. And we learn how to vastly reduce the risk of dementia with simple approaches anyone can use.

For centuries it was believed that the brain’s complexity prevented recovery from damage or illness. The Brain’s Way of Healing shows that this very sophistication is the source of a unique kind of healing. As he did so lucidly in The Brain That Changes Itself, Doidge uses stories to present exciting, cutting-edge science with practical real-world applications, and principles that everyone can apply to improve their brain’s performance and health.

NORMAN DOIDGE, M.D., is a psychiatrist, psychoanalyst, and New York Times bestselling author. He is on the research faculty at Columbia University’s Center for Psychoanalytic Training and Research in New York City and on the faculty of the University of Toronto’s Department of Psychiatry as well. He lives in Toronto.