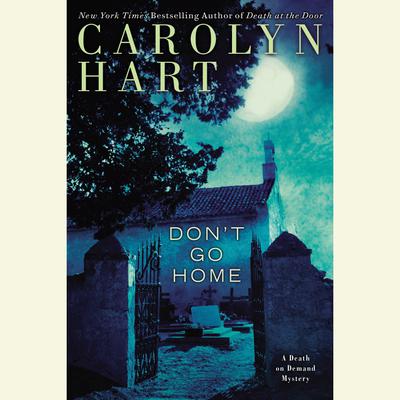 Annie Darling, owner of the Death on Demand mystery bookstore, is hosting a party to celebrate successful Southern literary icon—and former Broward’s Rock resident—Alex Griffith and his bestselling new novel, Don’t Go Home. But after the local paper announces that Griffith aims to reveal the real-life inspirations behind his characters, perhaps the author should take his own advice. Not everyone in town is ready to give him a glowing review.

As Annie attempts damage control, her friend Marian Kenyon gets in a heated argument with Griffith. It’s a fight Annie won’t soon forget—especially after the author turns up dead.

Despite an array of suspects to match Griffith’s cast of characters—and a promise to her husband, Max, to steer clear of sleuthing—Annie’s not about to let the police throw the book at her friend when the real killer remains at large…

An accomplished master of mystery, Carolyn Hart is the New York Times bestselling author of more than fifty novels of mystery and suspense, including the Death on Demand Mysteries and the Bailey Ruth Ghost Mysteries. Her books have won multiple Agatha, Anthony, and Macavity awards. She’s also been honored with the Amelia Award for significant contributions to the traditional mystery from Malice Domestic, and was named a Grand Master by the Mystery Writers of America. One of the founders of Sisters in Crime, Hart lives in Oklahoma City, where she enjoys mysteries, walking in the park, and cats. She and her husband, Phil, serve as staff—cat owners will understand—to brother and sister brown tabbies.