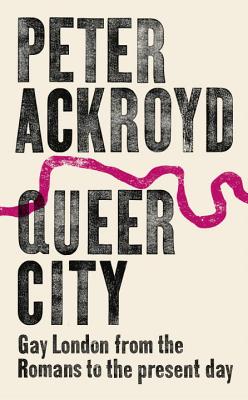 Gay London from the Romans to the Present Day

Peter Ackroyd is our preeminent chronicler of London. In Queer City, he looks at the metropolis in a whole new way - through the history and experiences of its gay population.

In Roman Londinium the penis was worshipped and homosexuality was considered admirable. The city was dotted with lupanaria ('wolf dens' or public pleasure houses), fornices (brothels) and thermiae (hot baths). Then came the Emperor Constantine, with his bishops and clergy, monks and missionaries. His rule was accompanied by the first laws against queer practices.

What followed was an endless loop of alternating permissiveness and censure, from the notorious Normans, whose military might depended on masculine loyalty, and the fashionable female transvestism of the 1620s; to the frenzy of executions for sodomy in the early 1800s and the 'gay plague' in the 1980s.

Ackroyd takes us right into this hidden city, celebrating its diversity, thrills and energy on the one hand; but reminding us of its very real terrors, dangers and risks on the other. In a city of superlatives, it is perhaps this endless sexual fluidity and resilience that epitomise the real triumph of London.

'Peter Ackroyd is the greatest living chronicler of London' Independent

Peter Ackroyd is an award-winning historian, biographer, novelist, poet and broadcaster. He is the author of the acclaimed non-fiction bestsellers London: The Biography, Thames: Sacred River and London Under; biographies of figures including Charles Dickens, William Blake, Charlie Chaplin and Alfred Hitchcock; and a multi-volume history of England. He has won the Whitbread Biography Award, the Royal Society of Literature's William Heinemann Award, the James Tait Black Memorial Prize, the Guardian Fiction Prize, the Somerset Maugham Award and the South Bank Prize for Literature. He holds a CBE for services to literature.
Loading...
or
Not Currently Available for Direct Purchase