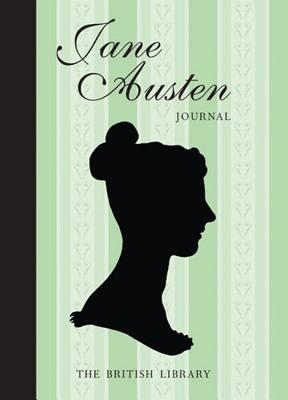 The British Library Jane Austen Journal is a classic lined journal with quotes by Jane Austen and illustrated with silhouettes by Jane's nephew, James Edward Austen-Leigh. The journal has an elastic closer and a storage pocket is included for keeping your notes and letters safe.

Jane Austen (1775 -- 1817) was an English novelist whose works of romantic fiction, set among the British middle class, earned her a place as one of the most widely read writers in English literature. Her realism and biting social commentary has gained her historical importance among scholars and critics, though her work brought her little personal fame and only a few positive reviews during her lifetime. Her plots, though fundamentally comic, highlight the dependence of women on marriage to secure social standing and economic security. Although Jane Austen wrote from her teenage years into her thirties her most notable writing was done from 1811 until 1816. During this period she wrote and extensively revised three major novels and began a fourth, Sense and Sensibility (1811), Pride and Prejudice (1813), Mansfield Park (1814) and Emma (1816). She wrote two additional novels, Northanger Abbey and Persuasion, both published posthumously in 1818, and began a third, which was eventually titled Sanditon, but she died before completing it at the age of 41. A descendent of Jane Austen, Freydis Welland owns the collection of silhouettes by James Edward Austen-Leigha and put together the images and the quotes for In the Country, published in 2008 by the British Library, Life in the Country, The British Library Jane Austen Desk and Pocket Diaries 2010, and The British Library Jane Austen Journal. Freydis lives in Vancouver, Canada

Stationery that will be a joy to all Jane Austen lovers and which will also enable us to give some very attractive and original Christmas presents this year.
or
Not Currently Available for Direct Purchase
Copyright © 2020 American Booksellers Association