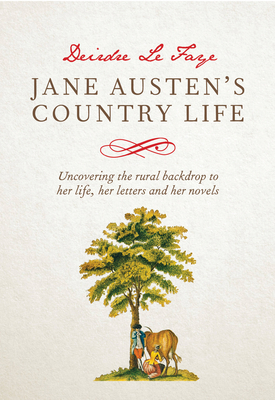 Jane Austen lived for nearly all her life in two Hampshire villages: for 25 years in her birthplace of Steventon, and then for the last 8 years of her life in Chawton, during which she wrote and published her great novels. While there are plenty of books describing her periods of urban life in Bath, Southampton and London, and the summer holidays in Lyme Regis and other West Country seaside resorts, no book has given consideration to the rural background of her life. Her father was not only the rector of Steventon but a farmer there as well, managing a property of some 200 acres. Her brother Edward, in addition, was a large landowner, holding the three estates of Godmersham in Kent, Steventon and Chawton in Hampshire. Agriculture, in all its aspects, was even more important to Jane than clerical life or the naval careers of her younger brothers. This book fills a gap in the Austen family background, discussing the state of agriculture in general in the south of England during the wartime, conditions which lasted for most of Jane Austen's life, and considering in particular the villages and their inhabitants, the weather conditions, field crops, farm and domestic animals, and the Austens' household economy and rural way of life. Apart from these obvious sources, there are other Austen family manuscripts, as yet unpublished, which provide particular and unique information. Richly illustrated with contemporary depictions of country folk, landscapes and animals, Jane Austen's Country Life conjures up a world which has vanished more than the familiar regency townscapes of Bath or London, but which is no less important to an understanding of this most treasured writer's life and work.

â??[the] detail makes this book an absolute joy to read â?¿ Le Faye is a deliciously conversational writer, who doesnâ??t know how to write a dull sentence. Â The result is a book that one constantly needs to share with anyone who will listen.â?

Miss LeFayeâ??s likeable study proves that, in her own quiet way, Austen wasnâ??t afraid to get her hands dirty.â?

"an attractive addition to any Austen collection.Â  Superbly illustrated, it is a treat to read."

"presents a panoramic appreciation of the countryside pleasures and hardships ... masterfully explores all aspects of the 'rural backdrop' to Austen's letters and novels ... the visuals enhance almost every page of this elegant book."

"an attractive addition to any Austen collection.Â  Superbly illustrated, it is a treat to read."

"presents a panoramic appreciation of the countryside pleasures and hardships ... masterfully explores all aspects of the 'rural backdrop' to Austen's letters and novels ... the visuals enhance almost every page of this elegant book."

Miss LeFaye’s likeable study proves that, in her own quiet way, Austen wasn’t afraid to get her hands dirty.”

Deirdre Le Faye is an expert on Jane Austen, and the author of several books about her, including the definitive factual biography Jane Austen: A Family Record (Cambridge University Press) and completely new editions of Jane Austen’s letters for Oxford University Press. She was recently awarded an honorary doctorate by the University of Southampton for her Austenian work and publications. She lives in Portishead, North Somerset.