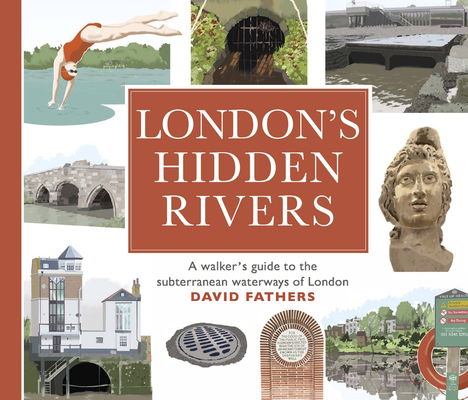 A walker's guide to the subterranean waterways of London

London has many rivers, but they are often hidden under centuries of development. Rivers like the Walbrook, the Fleet or the Westbourne have left their mark on the city, and still form an important part of our subterranean world.
David Fathers traces the course of twelve hidden rivers in a series of detailed guided walks, illustrating the traces they have left and showing the ways they have shaped the city. Each walk starts at the tube or rail station nearest to the source of the river, and then follows it down to the Thames through parkland, suburbia, historic neighbourhoods and the vestiges of our industrial past. Along the way there are encounters with such extraordinary Londoners as William Blake, Judy Garland, Paul Robeson, Terence Donovan, Bradley Wiggins, Nelson, Lenin, Freud, and the great Victorian engineer Joseph Bazalgette.
Hidden Rivers of London contains over 120 km of walks, both north and south of the Thames. Winding through the hills, valleys and marshes that underlie the city, every page is a revelation.

DAVID FATHERS originally trained as a graphic designer and now runs an internet company. However he has always had a passion for drawing, painting and maps. Nearly ten years ago he was commissioned by the Royal Botanic Gardens at Kew and Wakehurst Place to create their first digital visitors guides. These are still in use today. Having lived in London for over thirty years, he is slightly embarrassed to admit that he only discovered the subject of his first book, The Regent's Canal, a few years ago. The success of that first book has led to The London Thames Walk and Hidden Rivers of London (June 2017).


Praise For London's Hidden Rivers: A walker's guide to the subterranean waterways of London…

'This book completes an aquatic trilogy that is so accomplished, we half expect to see a cover endorsement from Old Father Thames himself... This is a book that will surprise and delight even those who think they already know the hidden rivers of London. For those who don't, you won't find a more charming introduction.' - Londonist
'This a lovely book just to idly read through, or alternatively it is an ideal guide book to walk the routes yourself. It is clear that the author has considerable passion for the subject, and has created a work of the highest possible quality, design and accuracy.' - Mapping London
or
Not Currently Available for Direct Purchase
Copyright © 2020 American Booksellers Association