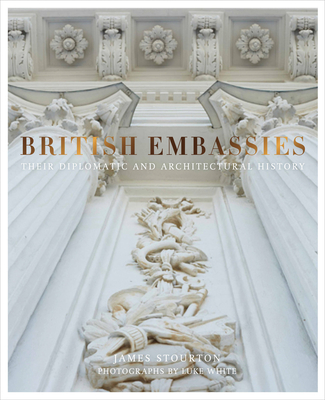 Their Diplomatic and Architectural History

A unique and glamorous book about British Imperial and post-Imperial architecture and a lively and evocative read for anyone interested in the international projection of British power and culture.

British Embassies have a special role in our history. They represent our country in bricks and stone and have often expressed – at least in the eyes of foreigners – our national character. Whether they are Lutyens buildings in Washington, grand palaces in Europe, beautiful old colonial buildings in Asia, or secure compounds in the Middle East, they all have stories to tell and reveal the changing face of British diplomacy.

James Stourton is the prize-winning author of five books including Great Houses of London and the authorised biography of Kenneth Clark; Life, Art and Civilization. He is a former Chairman of Sotheby's UK, he sits on the Heritage Memorial Fund panel and the Acceptance in Lieu panel and is a senior fellow of the Institute of Historical Research, London University.

Luke White’s photographs have been widely published in interior design and architectural magazines including Architectural Digest, Vogue and Homes and Gardens. His books include Sally Storey’s Lighting by Design and The Irish at Home by Jane and Sarah McDonnell.


Praise For British Embassies: Their Diplomatic and Architectural History…

‘I have been to the more obvious ones — Washington, Moscow, Paris — but I had no idea of their variety and splendour until I opened James Stourton’s new book British Embassies. It appears at just the right time.’
- Charles Moore, Spectator

‘Beautifully produced. Luke White has photographed the unpeopled rooms with a panache that makes us feel we are entering some with hushed awe. James Stourton has supplied a concise, yet fascinatingly detailed – at times gossipy – history.’
- Nicky Haslam, House & Garden

'It is a beautiful — and heavy — book, with fine photographs by Luke White. But what distinguishes it is the skill and acuity with which James Stourton has written the commentary, making it a serious and engrossing work of history.'
- Christopher Meyer, Spectator

'Few books cause a jaw to actually drop, but this is one of them. The sheer opulence depicted is breathtaking, as are the subtle and clever ways used to incorporate the personality of each host country whilst maintaining a core that is quintessentially British. There is much here to draw the reader in.'
- The English Home
or
Not Currently Available for Direct Purchase
Copyright © 2020 American Booksellers Association