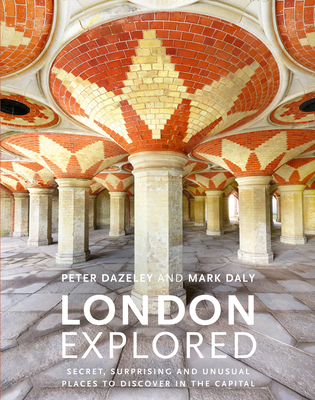 Secret, surprising and unusual places to discover in the Capital

This visually stunning guide takes you on a journey to some of London's most interesting, surprising and unique places.

London is packed with little-known treasures: remarkably preserved historical houses, fascinating museums and galleries, unusual commercial and industrial buildings and sumptuous interiors that are glimpsed only on special occasions.

A follow-up to the hugely successful Unseen London and London Uncovered,London Explored is a unique London guidebook that opens the doors to more than sixty of the capital's most surprising and intriguing places. The locations include an upmarket gun shop, a working bronze foundry, a secret underground bunker, a lavish casino and a jewel-like chapel. Mark Daly’s lively commentary accompanies the stunning photography of Peter Dazeley.

From the lavish eighteenth-century private members' clubs of Westminster and the grand magnificence of the Admiralty Arch, through the city's wide array of cultural and historical museums, to a look inside the lesser known sights like Tower Bridge lifeboate station or Clapham's enormous abandonded underground bomb shelter, this beautiful compendium delves into the history and heritage of these places, offering a fascinating picture of one of the world's great cities as it was and as it is today.

Explore London with this special guide to the city's secret and surprising buildings. Describing the history and the character of each place, the book uncovers a wealth of stories about an endlessly remarkable world city with its own unique character.

Praise For London Explored: Secret, surprising and unusual places to discover in the Capital…

PETER DAZELEY FRPS, known as Dazeley, is a celebrated London photographer renowned for fine art and advertising  photography. He was born in West Kensington and studied photography at Holland Park School, now known as the Socialist Eton. His work has won many awards from organisations across the world, including the Association of Photographers and the Royal Photographic Society in the UK, EPICA in France, Applied Arts Magazine in Canada, and Graphis Inc. in the USA. Dazeley is a member of the Association of Photographers and a fellow of the Royal Photographic Society. Peter Dazely is the photographer of Unseen London, London Uncovered, London Theatres (all Frances Lincoln).

MARK DALY is a writer and publisher with a longstanding interest in secret and little-known aspects of London. He has also devised a number of London walking tours, focussing on little-known or unusual aspects of the city. His previous book with Dazely is the acclaimed Unseen London.