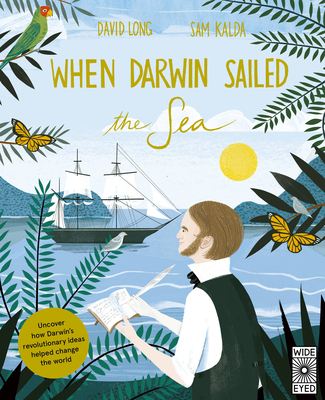 When Darwin Sailed the Sea

Published to celebrate the 200th anniversary of the launch of the HMS Beagle, this beautifully illustrated narrative nonfiction book tells the story of Charles Darwin, and shows how his revolutionary research changed the world forever.

At the age of 22, Charles Darwin clambered up the steps of HMS Beagle armed with enough notepads to last him for several years and set sail on a journey of exploration that would change his life and how we view the entire world forever.

“The voyage of the Beagle has been by far the most important event of my life and has determined my whole career.”

From his fascination with the natural world that began at an early age, his love of collecting new specimens, and keen eye for observation to his groundbreaking theory of evolution, uncover the incredible life of Charles Darwin in this fascinating story of his life.

At the back of the book, explore a selection of the amazing species he discovered, concise profiles of some of the incredible people who helped Darwin on his path to becoming a groundbreaking scientist, a glossary of terms, and a timeline of Darwin’s life and career.

When Darwin Sailed the Sea is the perfect book for any child who has ever looked at the world and asked “why.”

Praise For When Darwin Sailed the Sea: Uncover how Darwin's revolutionary ideas helped change the world…

"An approachable biography to connect children with this influential figure."—Angela Leeper, Booklist

"Especially recommended for elementary school and community library picture book Science Biography collections for children, When Darwin Sailed the Sea is an extraordinary, informative and fun account of one of the most influential and important men of 19th Century science."—Midwest Book Review

David Long writes for adults and children and specializes in history. As a journalist, he has written for the Times, Sunday Times, and London Evening Standard as well as for magazines in Britain and abroad. He is an award-winning ghostwriter and one of his own books was voted Blue Peter Book of the Year 2017.

Sam Kalda is an illustrator and artist based in Minneapolis. He was born and raised in South Dakota—which sounds much more exotic than it actually is. His commissioned works include editorial, book, advertising and pattern illustration. In 2017, he received a gold medal in book illustration from the Society of Illustrators in New York. His first book, "Of Cats and Men: History's Great Cat-loving Artists, Writers, Thinkers and Statesmen," was published in 2017 with Ten Speed Press.