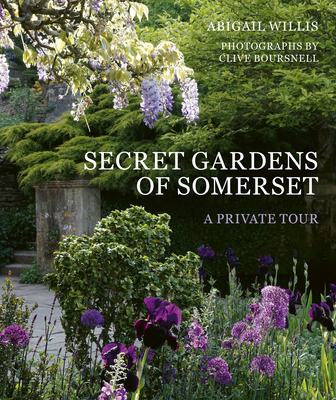 The Secret Gardens of Somerset (Hardcover)

The seventh largest county in Britain, Somerset is blessed with a mild climate, fertile soils and diverse landscapes that include the low lying Levels, a Jurassic coastline, the moorland uplands of Exmoor, and a collection of hill ranges, from the limestone Mendips in the north to the Poldens in the centre and the Blackdowns, Brendons, and Quantocks to the West.
Somerset has long appealed to gardeners – this is the county in which two outstanding garden makers of the 20th-century - Margery Fish at East Lambrook Manor and Penelope Hobhouse (Hadspen, Tintinhull) - chose to make their gardens. Notable historic gardens include Hestercombe (two gardens for the price of one, with its restored 18th-century landscape ‘stroll’ garden and Jekyll/Lutyens ‘Great Plat’), and Arts & Crafts style gardens at Barrington Court and Lytes Cary.
Taunton, Somerset’s county town, hosts one of the oldest flower shows in the country, started in 1831 and still thriving.
Somerset’s gardening scene is ever evolving. Sarah Mead’s organic garden at Yeo Valley is one of only a few certified organic ornamental gardens in the UK, Piet Oudolf’s ‘Field’ at Hauser & Wirth has given Bruton its own pocket of prestige prairie planting, while just down the road at The Newt (formerly known as Hadspen House and gardened by Penelope Hobhouse and Sandra and Nori Pope), is a highly lauded new garden and garden museum which opened in 2019.  At Kilver Court in Shepton Mallet, an early 20th-century garden designed for factory workers and set against the uncompromising backdrop of a railway viaduct has been re-invigorated by fashion designer Roger Saul who has restored its 1960s rock garden and added a modern parterre of his own design.
Charming lesser known gardens in Somerset include Midney Gardens, the Bishops’ Palace in Wells, the Walled Garden at Mells, and the late Jean Lorraine’s Greencombe Gardens, a organically run woodland garden overlooking the Bristol channel in Porlock.
Somerset is home to top-flight nurseries such as Avon Bulbs, Kelways Nursery, Elsworthy Cottage Plants and Pennard Plants, along with excellent smaller enterprises such as CB Plants at Lower Severalls, and Long Acre Nursery, specialists in shady plants.
Somerset’s landscape has been shaped by horticulture: the Levels became a centre for intensive horticultural peat extraction in the 1960’s. And for years a county that westward bound tourists raced through intent on getting to the holiday resorts of Devon and Cornwall, Somerset is increasingly recognised as a rewarding destination in its own right and whose inspirational gardens – historic and modern - reveal a seam of creativity every bit as fertile as its famous peat.

SIR ROY STRONG is a well-known historian and garden writer, lecturer, critic and columnist and a regular contributor to television and radio programs. He was Director of the National Portrait Gallery from 1967 to 1973 and of the Victoria and Albert Museum from 1974 to 1987. In 1980 he was awarded the prestigious Shakespeare Prize by the FVS Foundation of Hamburg in recognition of his contribution to the arts in the UK. He has published a number of highly acclaimed books. Sir Roy lives in Hereford, where, with his late wife, Julia Trevelyan Oman, who died in 2003, he designed one of England's largest post-war formal gardens. He now works full-time as a writer and broadcaster.