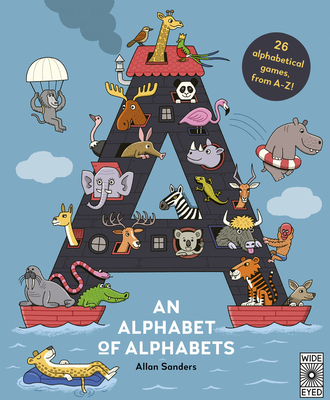 An Alphabet of Alphabets

"It's a word lover's dream… An extravaganza for alphabetarians." –Kirkus Reviews
Take a ride through 26 fully-illustrated alphabets, each one an A to Z of things to spot.
From an A to Z of Birds (A is for Albatross, B is for Bluebird), to an A to Z of Zoo (A is for Aardvark, B is for Baboon), this is an alphabet of alphabets. Jam-packed full of funny things to spot and plenty of Where's Waldo-style humour, this the best way to learn your ABCs and lots of new words as well!
Great for parents and guardians to use with kids, or for young readers to enjoy independently, the 26 fun puzzles will keep readers entertained for hours.

Amanda Wood began her career in illustration at the Natural History Museum, London, and went on to be the founding Editor and Publisher of Templar for more than 30 years. In her time there, she published and nurtured numerous Greenaway winners, and edited and wrote groundbreaking series such as The Ologies, which have sold over 19 million-copies worldwide. Today she writes and runs her own small press from her home in Surrey.

Mike Jolley has worked as an Art Director in children’s books for over 25 years. He also sells artwork made from found objects, under the name ‘Box 2’. It was during one of his many junk shop visits that the idea of using midcentury school information charts for Curiositree first took shape. He lives on a cliff overlooking the English Channel.

ALLAN SANDERS was born in a small grey shipbuilding town in the North West of England. He studied at Manchester University and the Royal College of Art. Allan has worked on many illustrated children's book projects including a series of flap books for Templar Publishing with titles such as On the Move, My Amazing Body and Outer Space. He has also illustrated Perfectly Perilous Math, publishing by Workman. He is a regular contributor to the New Yorker and The Economist among other editorial clients. He lives in Brighton, UK.