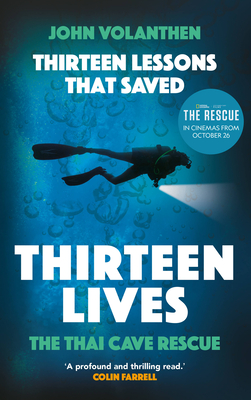 READ ABOUT THE HEROIC RESCUE, AS SEEN IN RON HOWARD'S THIRTEEN LIVES, FROM THE MAN AT THE HEART OF THE SEARCH.

‘A profound and thrilling read.’

This is the thrilling account of the dramatic Thai cave rescue which saved the lives of thirteen people, from the diver who led the rescue.

In this first-hand account, John Volanthen reveals how he pushed the limits of human endurance in the life-or-death mission to rescue the Thai youth soccer team trapped in the flooded cave.

‘A profound and thrilling read.’ —COLIN FARRELL
‘Riveting...a powerful story written by a hero who lived it.’ —RON HOWARD, Oscar-winning director of Apollo 13

The world held its breath in 2018 when the Wild Boars soccer team and their coach went missing deep underground in the Tham Luang cave complex in northern Thailand. They had been stranded by sudden, continuous monsoon rains while exploring the caves after practice.

With torrential rain pouring down and the waters still on the rise, an army of rescue teams and equipment was deployed, including Thai Navy SEALs, a US Air Force special tactics squadron, police sniffer dogs, drones and robots. But it was British cave diver John Volanthen and his partner, Rick Stanton, who were first to reach the stranded team and who played a key role in their ultimate rescue.

As John’s light flickered from one boy to another, he called out, ‘How many of you?’ ‘Thirteen,’ a boy answered.  After 10 days trapped in desperate darkness, the boys and their coach were all alive.

Each chapter of Thirteen Lessons that Saved Thirteen Lives tells one part of the edge-of-your-seat mission from Tham Luang but also imparts a life lesson, gleaned from John’s previous rescues and record-breaking cave dives, that can be applied to everyday obstacles and challenges.

In this story of breathtaking courage and nerves of steel, John reveals how responding positively to the statement, ‘But I can’t…’ by stating, ‘I can,’ led to one of the most incredible rescues of all time.

He hopes that his story will inspire the superhero in you. Meanwhile, he is always on standby for the next rescue.

‘Thirteen Lives is a case study in courage and volunteerism – the courage of those who were trapped, of the divers, of the officials and of the locals who all came together to overcome insurmountable odds while the world watched.’

‘John’s involvement in one of the most Herculean rescue efforts ever makes him a perfect guide for readers. His insights are riveting. The suspense and emotion are palpable. It’s a powerful story written by a hero who lived it.’—Ron Howard, Oscar-winning director of "Apollo 13"

‘In his new book, Thirteen Lessons That Saved Thirteen Lives, John reveals the nail-biting moments that left him preparing for the worst – from sedating the boys with ketamine to the exhausting swim for survival…He tells of the operation in heart-stopping detail, while also sharing the coping techniques he employed which can be used in everyday life.’—Daily Mirror

‘In our filmmaking, we have been drawn to stories of people who have accomplished extraordinary, impossible things. What you [John Volanthen] were able to do in Thailand feels like a natural continuation of that focus; it is what attracted us to want to tell the story of the rescue. This is one of the great stories of our time.’—Chai Varsarheylyi, Ocar-winning co-director of "Free Solo"

John Volanthen began caving with the scouts at the age of 14 and is now a world record–holding British cave diver who has been at the forefront of underground rescue and exploration for over twenty years. Best known as the first diver to locate and contact the missing youth Thai soccer team with his diving partner Rick Stanton, he also planned and participated in the children's rescue, carrying three children to safety. John has been involved in search, rescue and recovery operations as well as mapping caves worldwide. His many awards include the British and Commonwealth George Medal, Royal Humane Society Bronze medal and Scientific Exploration Society Pioneer with Purpose.

With a background in medical electronics, John has invented underwater mapping devices, communications systems and state of the art, micro rebreathers, allowing divers to stay underwater longer than was previously possible. In 2005 at Wookey Hole in Somerset,  Volanthen and Stanton advanced the British cave diving depth record to 90 m (295 ft). As part of an international team, he set a world record for the longest cave dive from the surface, reaching 10k m (33,000 ft) in the Pozo Azul cave system in the Rudrón Valley in Spain. John lives in Bristol and continues to explore and document underwater caves throughout the world. He is always on standby for the next rescue.