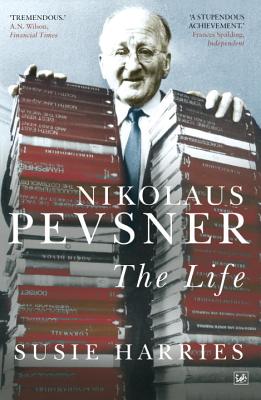 The definitive biography, based on exclusive access to diaries and personal papers, as well as the archive of Pevsner's landmark series, The Buildings of England Born Nikolai Pewsner into a Russian-Jewish family in Leipzig in 1902, Nikolaus Pevsner was a dedicated scholar who pursued a promising career as an academic in Dresden and Göttingen. When in 1933 Jews were no longer permitted to teach in German universities, he looked for employment in England. There he made himself an authority on the exploration and enjoyment of English art and architecture, so much so that his magisterial county-by-county series of 46 books on The Buildings of England (first published 1951-74) is usually referred to simply as "Pevsner." As a critic, academic, and champion of Modernism, Pevsner became a central figure in the architectural consensus that accompanied post-war reconstruction; as a "general practitioner" of architectural history, he covered an astonishing range, from Gothic cathedrals and Georgian coffee houses to the Festival of Britain and Brutalist tower blocks. Susie Harries explores the truth about Nikolaus Pevsner's reported sympathies with elements of Nazi ideology, his internment in England as an enemy alien, and his sometimes painful assimilation into his country of exile. His Heftchen—secret diaries he kept from the age of 14 for another 60 years—reveal hidden aspirations and anxieties, as do his numerous letters (he wrote to his wife, Lola, every day that they were apart). Harries is the first biographer to have read Pevsner's private papers and, through them, to have seen into the workings of his mind. Her definitive biography is not only rich in context and far-ranging, but is also brought to life by quotations from Pevsner himself. He was born a Jew but converted to Lutheranism; trained in the rigor of German scholarship, he became an Everyman in his copious commissions, publications, broadcasts, and lectures on art, architecture, design, education, town planning, social housing, conservation, Mannerism, the Bauhaus, the Victorians, Zeitgeist, Englishness, and how a nation's character may, or must, be reflected in its art. His life—as an outsider yet an insider at the heart of English art history—illuminates both the predicament and the prowess of the continental émigrés who did so much to shape British culture after 1945.

Susie Harries has coauthored seven books, including The Academy of St Martin in the Fields, The War Artists, and A Pilgrim Soul: a Life of Elisabeth Lutyens. She has also written for the Independent and reviewed books on the arts for The Times Literary Supplement.
Loading...
or
Not Currently Available for Direct Purchase