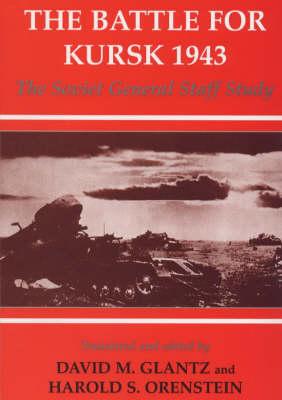 This volume offers detailed information about the Red Army's preparation for and conduct of the Battle of Kursk, the nature of the war on the German Eastern Front, and on the range of horrors that have characterized warfare in the 20th century.

A graduate of the Virginia Military Institute, the University of North Carolina at Chapel Hill, and the U.S. Army's Command and General Staff College, Defense Language Institute, Institute for Russian and Eastern European Studies, and US Army War College, before retiring from the U.S. Army in December 1993, Colonel David M. Glantz served for over 30 years in various field artillery, intelligence, teaching, and research assignments in Europe and Vietnam, taught at the United States Military Academy, the Combat Studies Institute, and Army War College, founded and directed the U.S. Army's Foreign (Soviet) Military Studies Office, and established and currently edits The Journal of Slavic Military Studies. A member of the Russian Federation's Academy of Natural Sciences, he has written or co-authored more than 60 books and self-published studies and atlases, as well as hundreds of articles on Soviet military strategy, intelligence, and deception and the history of the Red (Soviet) Army, Soviet (Russian) military history, and World War II. In recognition of his work, he has received numerous awards including the Society of Military History's prestigious Samuel Eliot Morrison Prize for his contributions to the study of military history.
or support indie stores by buying on
Copyright © 2020 American Booksellers Association